Omega Sentinel (Karima Shapandar) is a fictional character associated with the X-Men and its spinoff Excalibur.
Karima is fitted with Omega-Prime Sentinel nanite technology which gives her superhuman strength, speed, reflexes, and endurance. She also has flight capacity, regeneration to repair any physical injury/damage she receives, and several projectile weapons, including high energy power blasts, as well as electrostatic poles built into her forearms that generate massive amounts of electrical energy.

Before she was a detective in India, she is trained in basic combat skills, identity tracking, and other basic skills that come with being a human detective. She also possesses knowledge on how to work most basic and advanced Earth-based technology. 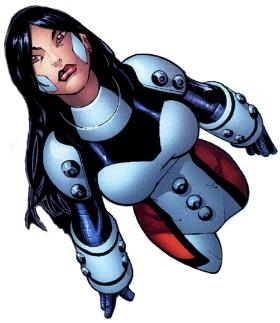 Posted by bluedreamer27 at 1:10 AM No comments:

Husk (Paige Guthrie) is a fictional character from Marvel Comics. Guthrie is a superhero associated with the X-Men.A mutant, Husk has the ability to remove - or "husk" - one layer of skin revealing an epidermis of a different composition beneath. She often changes into metal or stone form, but can shift into a variety of substances.Husk is from a Kentucky coal mining family and is the younger sister of the X-Men's Cannonball l. Unlike her brother, Husk is self-conscious of being seen as a "hick" (Jubilee often called her 'hayseed'). As a member of the X-Men's 1990s-era junior team Generation X, she established herself as an overachiever. She later joined the X-Men. 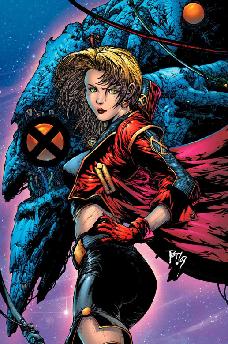 She has the mutant ability to shed her outer layer of skin and reveal a new layer or shape underneath. While she can sometimes acquire new forms, Husk has been able to shift into anything that does not exceed her body mass. Any extra mass left when she shifts into a smaller form such as an insect or a bird is shunted into an unknown extra-dimensional space, and will return to Husk when she resumes her human form; Paige most commonly takes on a Paige-like form in a new material, and much prefers to do that. She can become any solid that she has studied and can imitate adamantium, diamond, granite, wood, rubber, brick, and even glass.

She has the capability to blend in with surroundings, but in order to do so, she would have to study the texture she seeks to mimic first. In the alternate timeline of the Age of Apocalypse, Husk was able to shift into liquid substances, including complex acids capable of affecting organic steel. Husk also had the ability to change only part of her body (such as changing a hand into a bladed weapon). When Paige morphs into a different layer, she often takes on new physical abilities or qualities, such as increased weight, strength, or invulnerability. She can husk away minor injuries, but deeper ones will stay with her. She can hold a form for about an hour before she needs to revert back to her original form. She can morph repeatedly. She is not required to stay in any one form, but too many transformations can become very painful. In great stress or trauma, Paige can shed without control, revealing patchwork forms. When Paige ‘husks’, she sheds her clothing as well. This has the somewhat unfortunate side effect of leaving her nude when she returns to her normal form.

Posted by bluedreamer27 at 7:32 PM No comments:

Northstar (Jean-Paul Beaubier) is a fictional character, a superhero who appears in comic books published by Marvel Comics. Through his mutation, Northstar gains superhuman powers, which he uses for the betterment of society. Although originally a member of Alpha Flight, a fictional team of Canadian superhumans, Northstar is later portrayed as a member of the X-Men. He is one of the first openly gay superheroes in American comic books.

Northstar is a mutant who can move and fly at superhuman speed. He also possesses superhuman stamina and reflexes. He can channel a portion of the kinetic energy of the atomic motion in his body's molecules in a single direction, accelerating his body to a velocity in direct proportion to the amount of kinetic energy he has tapped. Northstar also has an advanced equilibrium, and exceptional agility and reaction time, which allows for him to make sharp turns, and run at such speeds without becoming sick. Northstar is also able to punch at great speeds, which grants him the ability to hurt even the Hulk. In an early issue of Alpha Flight Northstar reveals to readers that his sister Aurora can fly greater distances than he can, but that he can fly faster. Northstar can create cyclones by running in circles, can run up walls and across water, and can breathe while traveling at subsonic speeds.

As a side effect of partially robbing his molecules of their atomic motion, the binding forces within and between the molecules increase which enhances the sheer toughness of Northstar's entire body. This effect gives his skin enough durability to withstand speeds up to at least Mach 10 without injury. It had once been theorized that Northstar could fly at 99% of the speed of light (186,282 miles per second), although he never traveled anywhere near that speed because he would have done irreparable damage to the environment. While Northstar can withstand Mach 10 speeds, traveling any faster would carry complications with breathing and damage caused by wind and air resistance to his body. Northstar can also vary the rate of acceleration of his molecules to release a cascade of photons as bright as a lighthouse beacon. His powers have recently been enhanced to the point where he and Aurora can generate explosive thermal energy in addition to light.

Posted by bluedreamer27 at 5:37 AM No comments:

I am a big fan of American Idol and I’m very excited for their upcoming season next year. I keep on watching some of the previous Idol performances in YouTube. That is why I am very happy as I discovered an online video downloader and an online video converter which make it possible for me to download videos from youtube .
I’m glad that I can now download my favorite American Idol Performances. Thanks to Voydo that can now watch those vdeos n any time I want either in my computer or mobile.
If you are a big fan of Youtube and you wish to Download YouTube Videos in your computer, simply visit Voydo at www.voydo.com
Posted by bluedreamer27 at 5:28 AM No comments: