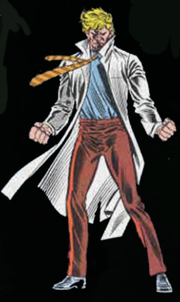 Dr. Henry "Hank" Pym is a fictional character that appears in publications published by Marvel Comics.Pym's character, which debuted in a standalone science-fiction anthology story, returning several issues later as the superhero Ant-Man, with the power to shrink to the size of an insect. Pym is eventually given a crime-fighting partner, Janet van Dyne, the Wasp, and goes on to assume other superhero identities, including the size-changing Giant-Man and Goliath; the insect-themed Yellow Jacket; and, as of 2009,The Wasp . Debuting in the Silver Age of Comic Books, the character of Henry Pym has featured in other Marvel-endorsed products

such as animated films; arcade and video games; television series and merchandise such as action figures and trading cards.
Dr. Hank Pym is a scientific genius of the highest order with expertise in the fields of quantum physics, robotics/cybernetics, artificial intelligence, biochemistry, and even entomology; he possesses a Ph.D in biochemistry and is one of the world's foremost biochemists. Notable achievements in robotics include the invention of Ultron and occasional repair of the android Vision. Pym also discovered the self-titled subatomic "Pym particles" that enable mass to be shunted or gained from an alternate dimension, thus changing the size of himself or other beings or objects.Pym has experimented with size-shifting for much of his adult life, initially via ingested capsules and later via particle-filled gas. Enough exposure to the particles eventually allows Pym to change size at will, as well as mentally generate Pym particles to change the sizes of other living beings or inanimate objects. Pym retains his normal strength when "ant" size, and possesses greatly

increased strength and stamina when in "giant" form, courtesy of the increased mass. He is able to attain a stated maximum height of roughly 100 feet (30 m) and a minimum height of 1/2 inch; he has also demonstrated the ability to shrink to subatomic size. Pym’s costume is synthetic stretch fabric composed of unstable molecules and automatically adapts to his shifting sizes.
He also uses a variety of aids, including a cybernetic helmet for achieving rudimentary communication with ants and other higher insects and to control their minds (as Ant-Man) and artificial wings and bio-blasters called "stingers" built into his gloves (as Yellowjacket). Pym also carries a variety of weaponry, provisions, and scientific instruments, which are shrunken to the size of microchips and stored in the pockets of his uniform.
Posted by bluedreamer27 at 11:45 PM