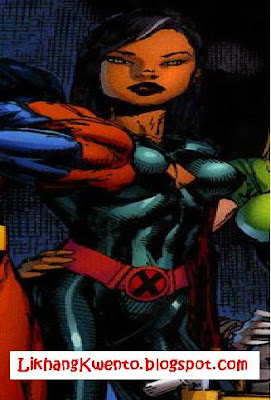 Sway (Suzanne Chan) is a fictional comic book superhero, a mutant in the Marvel Comics Universe.Suzanne was one of the "Missing X-Men"
She took the code-name Sway and went with MacTaggert. She was in the first team, along with Kid Vulcan, Darwin, and Petra to attempt to rescue the X-Men from Krakoa, but was sliced in half by the island's force. With the last of her power, she and the mortally wounded Petra combined their powers to save their remaining teammates from certain death. 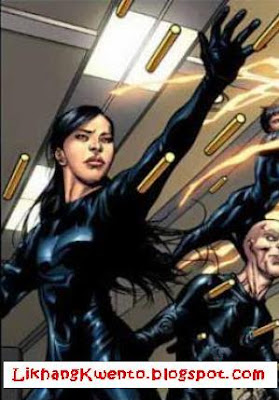 Sway demonstrated the ability to decelerate and probably stop time around her body, as well as a form of retrocognitive projection. It's highly possible her powers revolve around the control of chronitons, much like Tempo, another time-manipulating mutant. By focusing carefully, Suzanne was able to slow down and stop objects entirely, enabling her to freeze projectiles in mid-air, immobilize her enemies, and various other effects. Apparently, Suzanne's training had honed her abilities to the point where she could target specific objects in her range or everything within a certain radius.
Posted by bluedreamer27 at 10:53 PM