The Stepford Cuckoos are a group of fictional mutant psychically-linked quintuplets of the Marvel Comics universe, students at the Xavier Institute for Higher Learning. Known properly as Celeste, Esme, Irma "Mindee", Phoebe, and Sophie Cuckoo, their names, when placed in alphabetical order, also denote their respective ages—with Celeste being the first born and Sophie being the youngest. Originally calling themselves the Five-in-One, with the deaths of Esme and Sophie the remaining sisters are now known as the Three-in-One.
The Cuckoos share a telepathic hive mind. Powerful telepaths individually, their combined power is even greater than its sum. These powers allow them the psychic standards of broadcasting/receiving thoughts, mind control, planting illusions, force blasts of pure psionic energy, astral projection, etc. Their gestalt mind allows them to communicate with one another instantaneously, though the strength of their gestalt depends on their proximity to one another; the further they are from one another, the weaker their ability to connect. 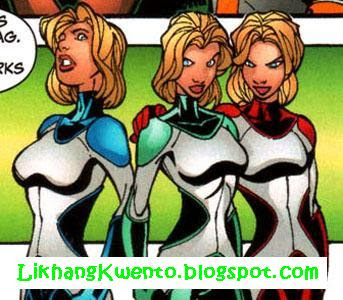 Though they most often function and act as one unit, they are indeed capable of thinking and operating individually. When all five sisters were alive, Sophie was the dominant consciousness and often commanded the Cuckoos. However, as implied by Esme's actions, it is possible for another one of the Cuckoos to wrest control of the gestalt and perhaps even use the powers of all sisters without the consent and knowledge of the others. With the loss of Sophie and Esme, The Cuckoos are not as strong as they were with five.
Like their mother, Emma Frost, each Cuckoo sister also possesses the ability to transform into an organic diamond body, and as such becomes completely impervious to harm. Unlike Frost, however, their diamond forms are flawless; such that nothing can enter or escape. They demonstrate this ability by sealing the splintered fragment of the Phoenix Force inside their hearts by permanently changing their hearts to diamond, in the process sacrificing their ability to ever feel genuine emotions again. The Phoenix Force eventually manages to escape, potentially allowing the sisters to regain their emotions. During the Warsong series, the Cuckoos gained the power of flight and pyrokinesis, presumably from Phoenix-induced telekinesis.
(source : Wikipedia)
Posted by bluedreamer27 at 10:34 PM