Susan Storm Richards (also known as Invisible Girl and later, Invisible Woman) is a fictional character, a Marvel Comics superheroine created by writer Stan Lee and artist/co-writer Jack Kirby. The character first appeared in Fantastic Four #1 in November 1961, and was the first female superhero created by Marvel in the Silver Age of Comics. Like the other founding members of the Fantastic Four, Sue received her powers after being exposed to a cosmic storm. Her primary power deals with light waves, allowing her to render herself and others invisible. However, she can also project powerful fields of invisible energy which she uses for a variety of offensive and defensive effects. Sue plays a central role in the lives of her brother, her husband, her children (Franklin Richards and Val Richards), and her friend, Ben Grimm. 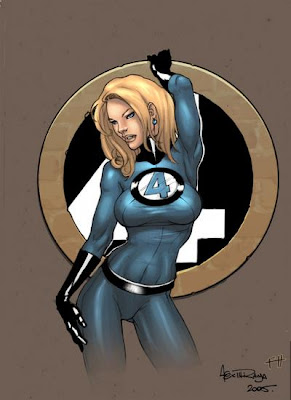 An object of infatuation for Doctor Doom, and, most notably, Namor the Submariner, Sue's passive invisibility power translated into her frequent deployment as a damsel in distress during the team's early adventures. However, upon developing the ability to project powerful fields of energy, Sue Storm became a more powerful member of the Fantastic Four, and the team's second-in-command. While Sue operated somewhat in the shadow of her hot-headed brother, Johnny Storm, and her brilliant husband Reed Richards in the early years, she is now the soul of the Fantastic Four and one of the premiere heroes in the Marvel Universe.

Some time after World War Hulk, but before Secret Invasion, the Richards' have hired a new nanny for their kids, Tabitha Deneuve. At the same time, a mysterious new group, calling themselves the New Defenders, commits robberies, and one of their members, Psionics, starts a relationship with Johnny. After a bad break-up, Johnny is kidnapped by the Defenders, along with Doctor Doom and Galactus, to power a massive machine that is designed to apparently save the people of the future 500 years from now, a plan orchestrated by Tabitha, who is revealed to be Susan Richards from 500 years in the future. Eventually, the present Fantastic Four are able to save both the present Earth and the future Earth by sending the future inhabitants to the Earth Trust's private duplicate Nu-Earth, but after freeing Doctor Doom, the future Sue goes to apologize to him, and is electrocuted by Doom


The Invisible Woman, as her name suggests, has the power to render herself invisible at will, as a result of the mutagenic effects of exposure to cosmic radiation. She has the psionic ability to manipulate ambient cosmic energy to mentally bend all wavelengths of light (including infrared and ultraviolet radiation) around her body without causing any visible distortion; she also somehow directs enough undistorted light to her eyes to retain her sight while invisible. Her body cells produce an unknown form of energy that she can mentally project around other people or objects, rendering them invisible. She can also use this energy to render visible, persons or objects rendered invisible by other means, and energy that is normally invisible.