Mr. Fantastic (Reed Richards) is a fictional character, a Marvel Comics superhero and a member of the Fantastic Four. Created by writer Stan Lee and artist/co-plotter Jack Kirby, he first appeared in Fantastic Four #1 (November 1961).
Possessing a mastery of mechanical, aerospace and electrical engineering, chemistry, all levels of physics, and human and alien biology, Richards is considered to be the most intelligent human being in the Marvel Universe, first among a select group which includes Bruce Banner (the Hulk), Henry Philip "Hank" McCoy (the Beast), Hank Pym (Yellowjacket), Tony Stark (Iron Man), T'Challa (the Black Panther), Victor von Doom (Doctor Doom), and Charles Xavier (Professor X). He is the inventor of the spacecraft which was bombarded by cosmic radiation on its maiden voyage, granting the Fantastic Four their powers. Richards gained the ability to stretch his body into any shape he desires. 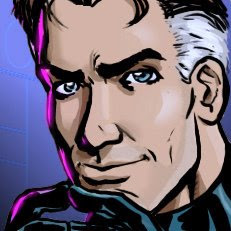 He is the leader of the Fantastic Four, although his methodical manner sometimes makes him seem cold and distant to his teammates, particularly best friend the Thing, who somewhat blames Richards for his transformation into a large, rocky creature. Whenever he is confronted with a scientific challenge, his attention can be so focused that he can neglect even his own family which has caused marital problems between him and Sue and has put his family in danger on rare occasions. He is, however, the husband of Susan Storm, father of son Franklin Richards and daughter Valeria Richards, and mentor of his brother-in-law, the Human Torch. According to BusinessWeek, Mr. Fantastic is listed as one of the top ten most intelligent fictional characters in American comics 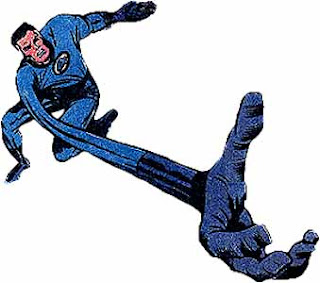 Reed Richards gained the power of elasticity from irradiation by cosmic rays. He has the ability to convert his entire body into a highly malleable state at will, allowing him to stretch, deform, and reform himself into virtually any shape. Reed Richards has been observed as being able to utilize his stretching form in a variety of offensive and defensive manners, such as compressing himself into a ball and ricocheting into enemies or flattening himself into a trampoline or a parachute to rescue a teammate. He can squeeze through openings sometimes even as small as one molecule's breadth. He can twist or reshape his body or stretch roughly three miles fully extended before physical pain. He can flatten himself to the thickness of a sheet of vellum. Due to Reed's distaste for violence, he will usually wrap an opponent up in his body to attempt to control and compromise with them. To trap an opponent, he can also flatten his body and smother his opponent until they give in. Other applications of his powers include expanding his lungs allowing him to hold his breath longer, adjusting the distance between his cornea and retina to allow for natural ocular magnification, and in at least one case shortening the distance between the synapses in his brain allowing him to process thought at impossible speeds. He has also shown that he can stretch his brain's cerebellum as to facilitate operation of Cerebro, the mutant finding computer devised by Professor Charles Xavier 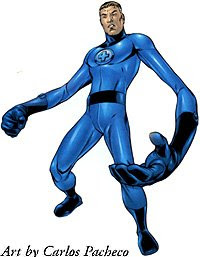 Because of his elastic nature, Mr. Fantastic cannot be harmed by traditional bullets or most other projectile weapons, including knives, missiles, darts, etc, and has superhuman durability. He can often cause projectiles to rebound back towards the attacker. Despite this, Reed is not completely invulnerable. His skin has been cut at least once by an evolved form of a Brood queen; while reaching into a direct hole to Hell created by Elizabeth Cromwell, a random demon reached out and inexplicably broke his arm; and on occasion if he suffers a large amount of head trauma he'll lose consciousness. He has also shown to have all the weaknesses of rubber, as he melts and weakens when exposed to extreme heat and will freeze and crack when exposed to super-cool temperatures. He has also occasionally demonstrated other applications of this molecular control. While imprisoned by Psycho-Man, meditation allowed him to reduce his body to a nearly liquid state in order to flow out of a glass encasement specially prepared by the villain to have only the most infinitesimal of openings 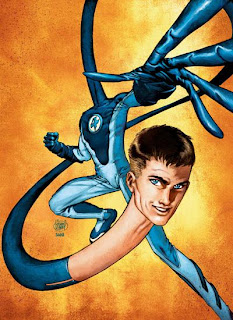 Richards was given possession of the Power Infinity GemThis gem contains access to all power and energy that ever has or will exist, and can back the other gems and boost their effects. It allows the user to duplicate almost any physical superhuman ability and become invincible. Like all former Illuminati members, Richards has vowed never to use or reveal the location of the gem.
Posted by bluedreamer27 at 11:06 PM