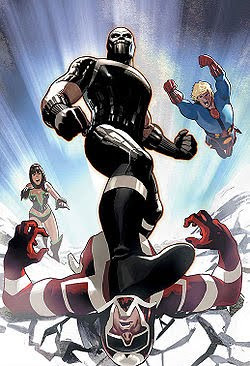 The Forgotten One (also known as Hero and Gilgamesh) is a superhero in the Marvel Comics universe. He is a member of the near-immortal hidden race known as the Eternals.

The Forgotten One is a member of the Eternal race, and possesses a number of superhuman abilities common to the Eternals, but has trained some of them far beyond the norm.

The Forgotten One possesses immense superhuman strength. While the exact limits are unknown, he is known as the, by far, physically strongest of all known Eternals, save for Thanos. His strength has been shown to rival that of Thor, and Hercules.

Like all other Eternals, The Forgotten One is virtually immortal. He hasn't aged since reaching adulthood and he is immune to all known diseases. Also, his body is highly durable and resistant to physical injury. He is capable of withstanding high caliber bullets, falls from great heights, powerful concussive forces, and temperature extremes without being injured. However, it is possible to injure him. He is in complete mental control over every molecule in his body, which allows him to regenerate any damaged or destroyed tissue. However, if his mental discipline over his body is broken, it is possible to permanently injure or kill him. 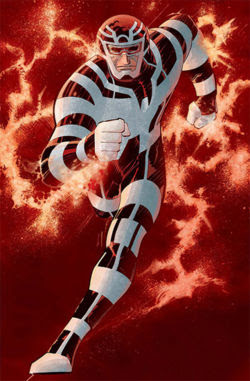 Other abilities he has in common with most other Eternals includes the power to levitate himself and fly at superhuman speed, projecting beams of concussive force or heat from his eyes and hands, and the manipulation of matter. However, to what degree these powers have been developed in comparison with other Eternals isn't known, but the first two have been stated as presumed to be average. He also has highly developed senses that helped to compensate for his former blindness, and is one of the most accomplished hand-to-hand combatants among the Eternals.

The Forgotten One is an extraordinary hand-to-hand combatant, with knowledge of most methods of combat known in ancient Earth civilizations. He is also an extraordinary hunter and tracker. He sometimes wears battle armor of unknown composition, and usually arms himself with simple hand weapons such as an axe, spear, or club.

Email ThisBlogThis!Share to TwitterShare to FacebookShare to Pinterest
Labels: Avengers, Eternals, Gilgamesh, Hero, The Forgotten One