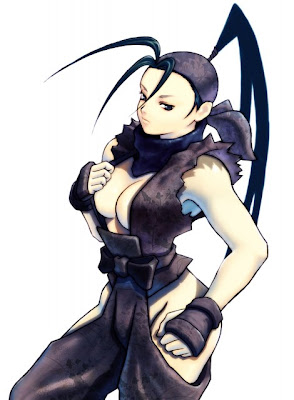 Ibuki is a female ninja (kunoichi) in the Street Fighter series. She first appeared in Street Fighter III and is voiced by Yuri Amano in all three games. Ayumi Fujimura has taken over that role in Super Street Fighter IV. Ibuki lives in a village entirely composed of ninjas where she has been training since childhood. After doing the same routine everyday while also attending school outside of the village, it has now started to take its toll on her social life. 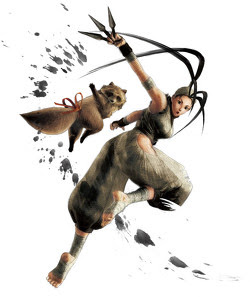 Ibuki is a beautiful young girl from Japan who is raised in a ninja village that is hidden from societies' watchful eyes. It is here; where she trains in the deadly art of ninjutsu. She has a slim, athletic build and her blackish/brown hair is held back tightly in a topknot that drops well below her waist. Unlike her other female counterparts in the same genre, Ibuki's outfit has a more traditional type of ninja dogi, consisting of a sleeveless upper garment, baggy pants, arm guards, and a mask that conceals the lower half of her face. Her footwear consists only of cloth bandages that are wrapped around her shins, ankles, and instep. According to the UDON comics, Ibuki wears a high-riding body suit under her garments that is similar to Cammy's outfit, although her winpose in the games and concept art clearly reveals her wearing a tanktop and a white thong underneath. Even though she is a well-trained assassin, she still displays a "Valley girl-ish" side by stating that she finds her ninja garments ugly and her daily training strange. She will jump right back into her "normal" clothes when her regimen is over and/or when she wins a fight.
Posted by bluedreamer27 at 2:33 AM