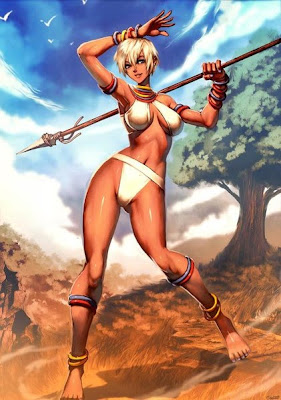 Elena is a character in the Street Fighter series. She first appeared in Street Fighter III and is voiced by Hotaru Fujino in New Generation and 2nd Impact and by Mie Midori in 3rd Strike. Elena is a princess in an African tribe that has a cultural tradition of fighting, making her a warrior princess. She may have been born in Kenya, but her fighting style is Capoeira which utilizes her strong, long legs with dance-like moves and fancy legwork. Her father, the tribe's chief, is a witch doctor. However, he also has a PhD in medicine obtained from a French university. Elena's views of fighting and martial arts differ from most due to her light hearted personality allowing her to befriend some people and annoy others. She wants to travel around the world, meeting new friends along the way. She studied as an exchange student in Japan, where she met her best friend Narumi. She later continued those studies in France. 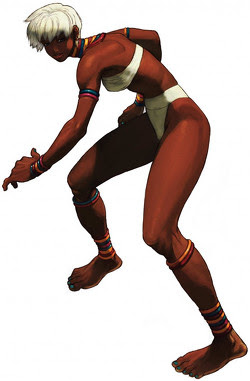 Elena has white hair, blue eyes, and dark skin. She is barefoot while fighting and has long, powerful legs. Her attire consists of a white two-piece bikini-like outfit with pale red, sky-blue, gold and purple bands on her neck, arms, wrists, shins, and ankles, making hers arguably the most revealing fight attire for a female in Street Fighter-verse history.

Elena's fighting style consists entirely of kicks and leg throws, even when the player uses a punch button command. She is the only Street Fighter character to use only kicks, in opposition to Dudley and Balrog who only use punches. (It should be noted that Dudley uses an elbow strike for his jumping HK and Balrog uses headbutts for his throws and his anti-air charge move.)

Elena is one of the only Street Fighter characters who has the ability to use Healing, a Super Art which allows Elena to regain up to 1/3 of her life energy bar if given the opportunity. The only other similar situation is in Street Fighter Alpha 3, when Juni and Juli fight together as an AI-controlled sub-boss team, as they can also heal themselves.