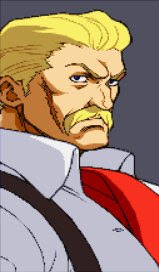 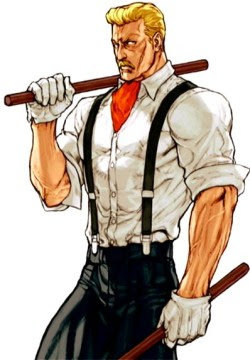 Eagle was born in the UK. A cold-blooded individual, Eagle is a bouncer who was employed as a newly-rich noble family's bodyguard during the first World Warrior tournament. He was hired to defeat Sagat, but was unsuccessful and returned to the bar scene, eventually becoming a living legend. Eagle is a tall, muscular fighter with blond hair arranged in a pompadour. In the original Street Fighter, Eagle's outfit consisted of a tuxedo without the jacket, a bow tie, and suspenders. However, in Capcom vs. SNK 2 and the PSP and GBA versions of SFA3, he wears a white dress shirt with a red ascot tie, black pants, white gloves, and of course, his braces (suspenders). His pomp, braces (suspenders), and formal dress make Eagle some sort of mixed counter-culture counterpart to Birdie, a punk.
Posted by bluedreamer27 at 7:17 AM