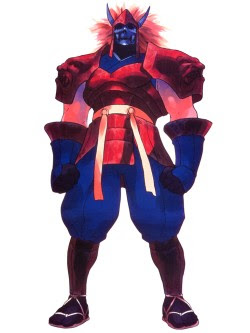 Garuda is a demon dressed in samurai-like armor wearing a skeletal mask who can make blades appear from every part of his body. He is a nonhuman entity that is a compilation of all the souls driven mad by Satsui no Hado, and it is later revealed that he also feeds on negative feelings such as anger, hatred, envy, treachery, and despair. Because of this, Garuda is known to be fatal even without taking action - this is due to the brainwaves which he emits. His age, exact origin, and fighting style are unknown. 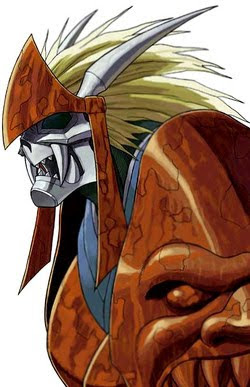 Like most characters in the EX series, he has no confirmed encounter with any of the other characters. Garuda fights harder against those who utilize Satsui no Hado. Garuda is one of the few characters in EX whose attacks cause the opponent to bleed profusely. This was removed from American ports of the game. Along with Skullomania, Garuda is one of the more memorable characters from the EX series and was even requested by some fans to be added to the Super Street Fighter 4 cast, to no avail however.
Posted by bluedreamer27 at 7:32 PM