Hugo is a character in the Street Fighter series. He first appeared in Street Fighter III: 2nd Impact where he was voiced by Wataru Takagi.He would also voice him in SvC Chaos but was replaced by Len Carlsen in 3rd Strike. Hugo Andore is a giant man raised on a farm in germany, and a former member of the Mad Gear gang. He crossed over to North America when he was 20 years old, and was able to use his sheer size and strength to start a career in professional wrestling. Hugo was undefeated in both the wrestling world as well as the ultimate fighting world. 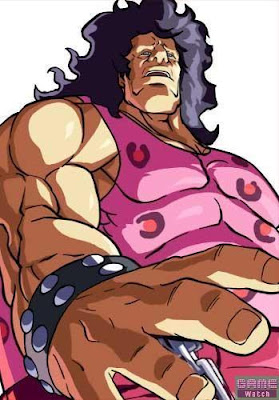 Hugo is unbelievably tall. Standing at 8 feet, he is the tallest character in Street Fighter history. Hugo traditionally wears a pink leopard skin tank-top with darker pink jeans, brown boots, and black studded wristbands. He wears a thick chain from the back of his waist, to 3/4 of the way around his waist, ending at his hip. He has long, messy black hair, that bounces and moves around as he moves and attacks. Hugo's face is considerably odd. His eyes are normally obscured by shadow during battle, but during certain animations, they become visible, revealing that he has no pupils, though he clearly has pupils in his character portrait. Hugo's design is said to be an homage to famed wrestler André the Giant.
Posted by bluedreamer27 at 7:52 AM