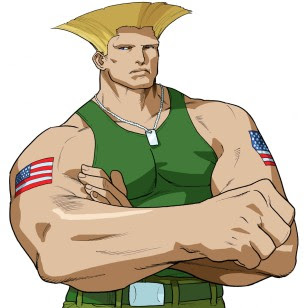 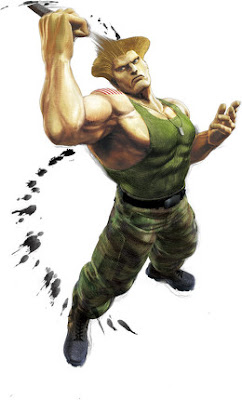 When Guile was a trainee in the United States Air Force, he befriended his superior officer, Charlie and asked him to teach him in his unique form of fighting, which Charlie agreed to do. Guile learned the style, but his hot temper caused him to be not as proficient in the moves as Charlie was (shown in how Charlie can shoot Sonic Booms with one hand while Guile needs both.)
Early Street Fighter II sketches and notes suggest that Guile was developed specifically to appeal to American fans. His physical appearance is strikingly different from the many Asian characters in the Street Fighter series, with light blue eyes, a chiseled jaw, and a particularly tall flattop haircut. The length of Guile's hair varies greatly from appearance to appearance. It is relatively realistic in Street Fighter II, and impossibly tall in SVC Chaos: SNK vs. Capcom. Capcom source books suggest that Guile's famous hairdo is styled with a special-order army hair spray to keep it up (though he ends up fixing it quickly after a match).
Guile is generally considered a top tier character in the Street Fighter II series. He is considered by most players as the best character after Ken and Ryu. Guile is the first of many characters to introduce the "charge" gameplay style, in that a player must hold in a direction for a few seconds and press in the other afterwards to pull off a special move. This type of gameplay can make Guile a defensive character. Because of the short lag after his Sonic Boom, though, he can follow it and use his various forward-moving attacks to pressure the enemy, which makes him offensively very powerful as well.
Posted by bluedreamer27 at 12:43 AM