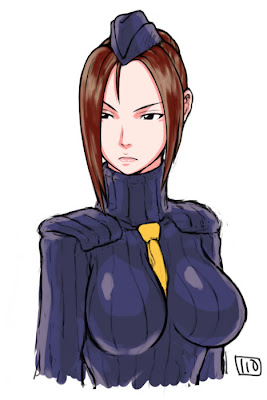 Juli is a video game character from the Street Fighter series. She made her first appearance in Street Fighter Alpha 3, she is a brainwashed female assassin belonging to M. Bison's Elite Guard or "The Dolls." Her name is German for JulyAll of the Dolls were teenage girls of around 16 years old who were captured by Shadaloo and brainwashed to be M. Bison's assassins and bodyguards. They were completely loyal to Bison and acted and talked like robots. They were high ranking members in Shadaloo, only lower than Bison and the other Grand Masters: Balrog, Vega and Sagat. One of them, Juli, was originally a girl named Julia from T. Hawk's tribe. After her kidnapping, Hawk vows to find her. In the UDON comic, Noembelu and Juli are both being sought after by T. Hawk. Noembelu is a member of the Thunderfoot Tribe whose family is close to T. Hawk. Juli is the daughter of a German doctor who provided care for the Thunderfoot Tribe. The doctor was found murdered and Juli disappeared. According to T. Hawk, Noembelu's name is Little Eagle. As for Juni she was kidnapped directly from Germany. Supposedly her brainwashing is the most complete of all the Dolls and her first mission, ordered by Bison to test her loyalty, is to murder her own family. She accomplished her mission flawlessly
Posted by bluedreamer27 at 2:36 AM