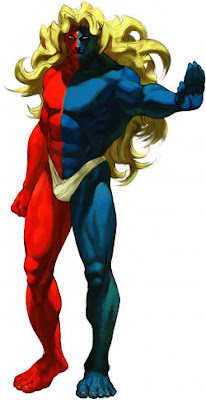 Gill(ギル) is a character in the Street Fighter series. He first appeared in and is the main boss of Street Fighter III and is voiced by Bruce Robertson in New Generation and 2nd Impact and by Lawrence Bayne in 3rd Strike.

He is presented as a cult leader who would become a benevolent monarch over his worthy subjects. However, his cult uses kidnapping, coercion, DNA manipulation, brainwashing, and extreme force in order to select their chosen people. Gill's appearance is characterized by his half red and half blue muscular body and flowing blond hair. He bears a distinct and intentional resemblance to a Greek God. 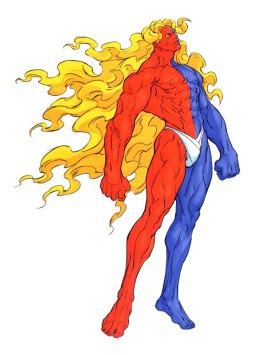 Gill is the leader of a mysterious cult-like organization called the Illuminati which has manipulated world events for over 2000 years, and is dedicated to the salvation of mankind, and creation of a new utopia. The Illuminati had genetically enhanced Gill in his youth, increasing his strength and speed so that he could participate in an intense hand-to-hand combat training program. Gill became the top student out of the hundreds of enhanced warriors involved, surpassing even his own jealous brother, Urien.
Gill is much more powerful than every other character in Street Fighter III, so he is unselectable during regular gameplay. However, in home versions of Street Fighter III, Gill can be selected after he has been defeated at least once by every character. He is even selectable in Xbox Live matchmaking service games, providing players the opportunity to choose an unusually powerful character during head-to-head play.
Gill's asymmetrical color scheme was a device for Capcom to display the graphical power of the CPS-3 board. In previous SF games, details such as Sagat's eye-patch would switch depending on which way the character was facing. Originally, Gill was to be colored black and white. It was later decided to color him red and blue, to better show off the game's graphical power.
Posted by bluedreamer27 at 8:22 AM