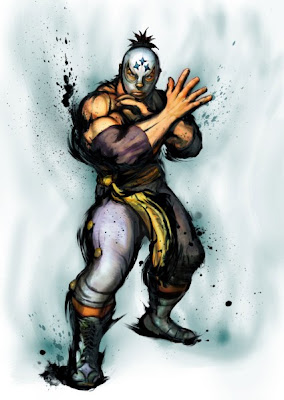 El Fuerte is a Mexican luchador who spends his time perfecting his lucha libre skills and honing his cooking abilities. His indomitable spirit is a match for even the legendary Zangief. He now travels the world in an effort to assemble the greatest recipes on the planet and made his first appearance in Street Fighter IV. His name is Spanish for "The Strong One." El Fuerte's role in the story is minimal. He joins the tournament to fight the other champions and discover what they eat and also test his lucha libre skills. Along the way, he meets Zangief who is his rival and fights to see if "A hurricane is stronger than a cyclone." El Fuerte's ending finds him asking what recipe is suitable for a great hero. E. Honda and Zangief suggest their favorite food (Chankonabe and Borscht, respectively). El Fuerte then suggests and mixes them together and adds some chilli peppers and some lemon. The results apparently tasted foul, as Honda and Zangief's faces turn blue with disgust. Then El Fuerte proclaims the food "tastes so great it sends you straight to heaven!" 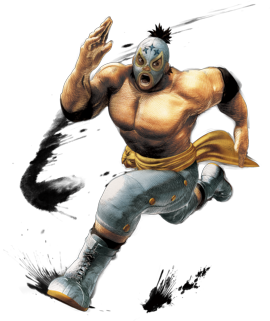 El-Fuerte is a short, but built Hispanic male. His official measurements are B120／W82／H90. He is 5 feet 7 inches tall and weighs in at 154lbs. El Fuerte dresses in typical luchador uniform to match his playing style. He is topless, but wears black wrestling bands on his arms and a gold sash on his waist. He wears short, white, wrestlers tights. They are buttoned up his thighs with four golden buttons and they also have three blue stars on his rear. He also wears white, laced, wrestlers boots with a golden sole. His mask follows the pattern of the rest of his outfit, being white with gold trim and having three blue stars on his forehead. El Fuerte's hair sticks out of his mask in a flared out ponytail-top. His hair also reaches out of the bottom of his mask and is brown in color.
El Fuerte is shown to be a huge fan of R. Mika in the UDON comics. In one scene, one of her matches is being shown on TV at a restaurant. T. Hawk, watching, requests that the channel be changed, since he can't stand pro wrestling. After hearing T. Hawk badmouth both pro wrestling, and Mika, El Fuerte bursts from the kitchen and yells at T. Hawk. Mika's image adorns every piece of El Fuerte's cooking attire, and Fuerte seems to keep a lot of Mika themed knick-knacks around, such as lunchboxes, posters, figurines, etc. This is possibly what makes them rivals.
Posted by bluedreamer27 at 7:23 AM