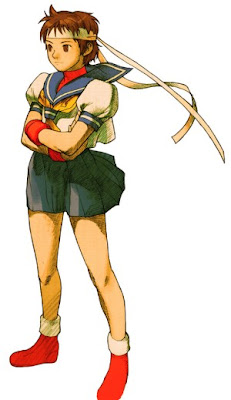 Sakura Kasugano is a video game character in the Street Fighter series of fighting games. She is a 16-year-old (as of Street Fighter Alpha 3) Japanese schoolgirl who has an intense fascination with Ryu. She has managed to copy and learn some of Ryu's techniques, but really wants him to train her personally.

Sakura typically fights in her school's uniform, a short-skirted sailor fuku (seifuku) with the collar popped and red bloomers underneath. She wears a red top under her uniform, sparring gloves, and a white headband.

Sakura was not one of the initial Street Fighters pulled into the Marvel Universe, but she did arrive for the second event during Marvel Super Heroes vs. Street Fighter. Sakura, having not yet fully mastered her own style of fighting, felt the most disoriented as a result of being in a different universe, and found that her fighting abilities were slightly altered. She was unable to control the direction of her Hadoukens and found them launching up towards the sky. However, she was excited to find that she could throw them in mid-air down towards the ground. But that was not the end of the oddities that Sakura encountered. 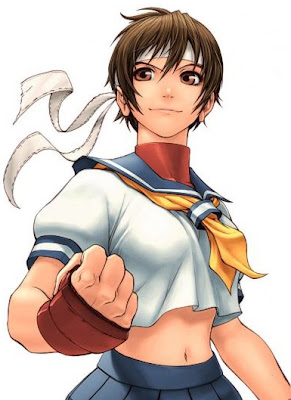 Sakura fights in an emulation of Ryu's fighting style. She can successfully manipulate ki and is subsequently able to perform the "Hadouken" energy attack (however, due to her lack of training, she cannot throw it the full length of the arena like Ken or Ryu can). Unlike Ryu and other practitioners of the same art, she can control the size of her Hadouken and throw larger Hadoukens that sacrifice range and execution speed for size (up to 3 times larger). In the Marvel vs. Capcom series, she throws her Hadoukens diagonally upwards, though her "Hiyakeshita" (literally "Sunburned") version still throws them horizontally). In Capcom vs. SNK 2, she is given an energy spark instead of a traditional projectile (called the "Hadoushou") that hits 3 times but is limited to the area in front of her hands. Her other attacks include "Shunpuu Kyaku", a short version of the "Tatsumaki Senpuu Kyaku" attack (instead of sailing through the air, Sakura's version rises then falls in an arcing pattern and traditionally only goes about 60% of the screen at its longest range) and "Shououken", a version of the "Shoryuken" that sees her running before executing the attack (weak version is very similar to a normal Shoryuken, but with an extended delay; when performed with the Fierce punch button, the attack can hit 6 times as she is running toward her opponent). Her super attacks include her own interpretations of the "Shinkuu-Hadoken" (the Shinkuu-Hadoken, like her regular projectile, will not cover the full length of the screen) and "Shoryu-Reppa" ("Midare Zakura"). Her third super attack is a ground based spinning leg attack (called the "Haru Ichiban", literally translated as "first one of the spring") that ends with a side kick that knocks her opponent away. In the Marvel vs. Capcom series (under her "Hiyakeshita Sakura" version), the Street Fighter EX series and Rival Schools she also gains the Shun Goku Satsu and marvel vs capcom. Sakura is able to launch her hadouken in air but bigger and multiable bigger hadouken and her shinnku hadouken is similar to ryu when she is in dark form this gameplay is in marvel vs capcom series
Posted by bluedreamer27 at 7:34 PM