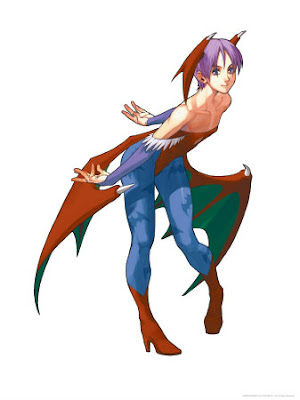 Lilith Aensland is a character from Darkstalkers. She is a miniature succubus who was created from energy drawn from the succubus Morrigan. This dangerous excess energy was separated from Morrigan at birth by her father, Belial, who sealed it away. The separated energy formed a mind of its own and named itself Lilith. 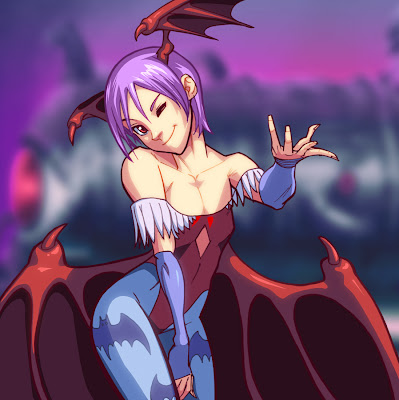 As she is derived from Morrigan, she shares similar attacks with Morrigan but with some different executions as well. For example, her Soul Flash is a projectile attack like Morrigan's Soul Fist but instead of a ki blast, she summons a shining green bat with hearts resonating around its body that only travels for a short distance. She does have attacks unique from Morrigan, such as her Mystic Arrow where she tosses her enemies across the stage with her wings in the manner of a bow and arrow. She can also have her bats attack in a swarm. She shares Morrigan's ability to transform her clothes into whatever she wants to wear at the moment.
Posted by bluedreamer27 at 5:56 PM