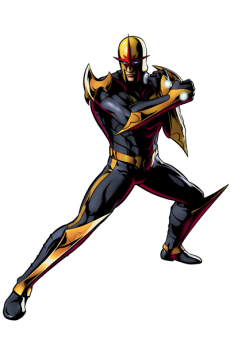 Richard Rider was born in Hempstead, New York. As a teenager, he was chosen at random by the alien Rhomann Dey, last surviving Centurion of the planet Xandar's elite Nova Corps, to inherit his power and succeed him in the rank of Nova Prime following the destruction of his world by the intergalactic pirate, Zorr. Having been mortally wounded in the battle that tore Xandar apart, Dey succeeded in tracking Zorr to Earth but was unable to exact vengeance due to the extent of his injuries. At death's door, Dey had little choice but to transfer his power to an unsuspecting human on the planet below, praying whomever he found will take up his cause and prove worthy of the powers he had given. Rider gained great strength, invulnerability, the power to fly, and a uniform with a sealed life support system, but little instruction on how to use these new powers. Still, he took up the life of a superhero, fighting costumed villains in New York and gradually learning how to use his new powers. 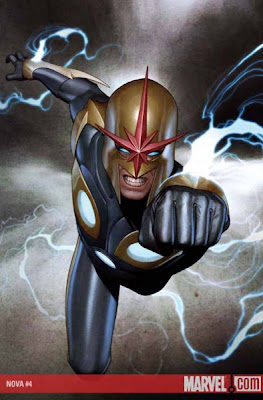 After a brief career as "Nova, the Human Rocket," he was called into space to serve in the protection of the recently reconstructed planet Xandar, the same world where his great powers originated. Eventually tiring of a life of constant intergalactic war and hoping to rejoin his high school friends, the boy requested to return home to Earth. When he was told he had to relinquish his powers in order to do so, Rider agreed.

For a time, Rider lived a relatively normal life, flipping burgers, and barely making ends meet due to his disrupted education. He spent his time trying to pick up the pieces of the life he had left behind, all the while wishing he could find a way to regain the powers he lost. Unknown to him, during this period, the planet Xandar was destroyed again in an attack by the space pirate Nebula.

Nova's rival appears to be Phoenix Wright. Nova has a staggering amount of super powers, while Phoenix Wright has absolutely none, not even any fighting experience.