Phoenix Wright from the Ace Attorney games is a character confirmed to be in Ultimate Marvel vs. Capcom 3. In his childhood, he made friends with Larry Butz and Miles Edgeworth. At the start of the series, he has recently acquired his attorney badge. While studying to become a defense lawyer, he was defended by Mia Fey and subsequently worked at her Fey and Co. Law office. He took over the office and renamed it Wright and Co. after she was murdered in the second case of the first Phoenix Wright: Ace Attorney game. The fourth Ace Attorney game, Apollo Justice, is set seven years after a case where Wright is incriminated for falsifying evidence and loses his defense attorney's badge. 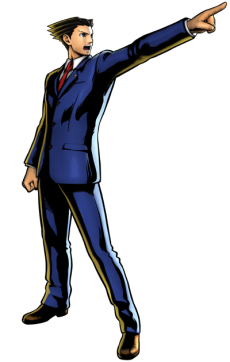 Wright first decided to become a defense attorney in his school days when he was falsely accused of stealing his classmate Miles Edgeworth's lunch money, and the class held a mock trial. In that moment when he felt alone, he decided that he wanted to become a defense attorney so that he could help people like himself who at that time had nobody to defend or believe them.
Posted by bluedreamer27 at 6:51 PM