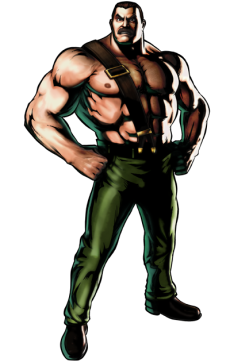 Mike Haggar is a wrestler turned mayor of Metro City and the main protagonist of the Final Fight franchise. He was also featured in the lesser-known Saturday Night Slam Masters and its sequel.

A former professional wrestler, Mike Haggar was elected mayor of Metro City. He quickly became popular with his reforms and cheerful personality, but he made several enemies among the city's criminal element. Haggar had a daughter named Jessica, who was dating a young fighter named Cody. Haggar took a liking to the youth, and the two became good friends.

Even though he was an elected official, Haggar continued to lift weights and practice his wrestling moves to keep in shape. While in the ring, his trademark move had been the "Spinning Clothesline," and he was surprised and flattered when he learned that a Russian wrestler named Zangief had copied the move. In response, Haggar copied Zangief's Spinning Piledriver, a move that Haggar quickly learned to love. One of Haggar's goals when he was running for mayor had been to rid Metro City of organized crime, and he was constantly pushing for stricter rules and harsher punishments for criminals 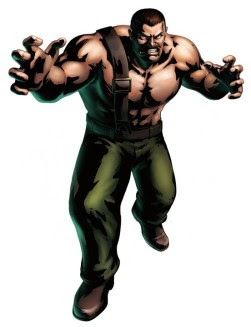 Mayor Mike Haggar is popular for his wrestling/street-brawling fighting style. That being said, all of his moves are based from the aforementioned style. He's also much of a contact bruiser like Hulk, for he is not as quick as the rushdown characters in the game. However, it's safe to say that Haggar is more combo oriented, as some of his throws create openings and combo extentions in addition to inflicting damage.
Posted by bluedreamer27 at 6:14 PM