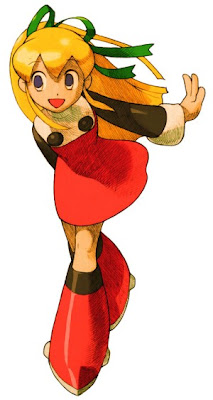 Roll is a kind-hearted and hardworking female robot designed for housekeeping instead of fighting. She's the younger counterpart of Mega Man, and plays a supporting role in the games. Roll first appears very briefly during the ending of the very first game of the series. Because so, her name was never mentioned until Mega Man 3, where her entry in Dr. Light's robot list is shown during the ending.

While she was not designed for fighting, she is a combatant in the fighting games, Marvel VS Capcom and Marvel VS Capcom 2, altought she can be considered somewhat of a "Joke Character", like Dan (but far more powerful if you compare Dan to Ryu and Roll to Megaman). In those games, she proves that she has about the same fighting qualities of her brother Mega Man, only much weaker and softer. In these games, she possesses an external shooting deviced named "Roll Buster". Her design is based on her appearance in Megaman 8/& Bass/Battle & Chase, where she look slightly older and feminine compared to the previous games, and wears a different dress. 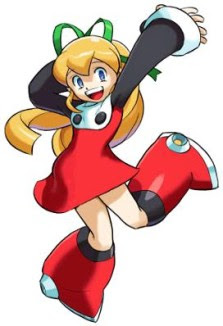 She is also a playable character in Mega Man Powered Up, the Mega Man remake, as a different sort of "joke character", where she uses a broom as a default weapon with her skill, the Roll Swing, which she uses to swing a close range weapon. Roll can be played in several unlockable outfits, each with its own variation of the broom weapon.

Her most recent appearance was in Tatsunoko VS Capcom. But her moveset has now changed, with her carrying a broom and having her own specials and hypers rather than copying Megaman. Roll is the smallest character in Marvel vs. Capcom: Clash of Super Heroes and the second in Marvel vs. Capcom 2: New Age of Heroes, with Servbot having the smallest sprite in the game.