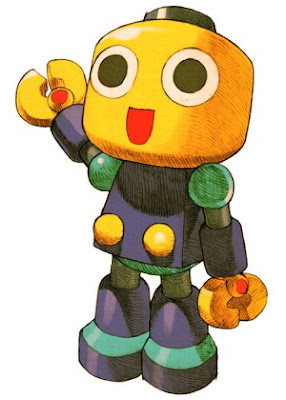 Servbot (Kobun in Japan, which roughly means "little follower") are a series of characters from the Mega Man Legends series. They are not a single character but one of a group of 41 small, indestructible robots made by the air pirate Tron Bonne to do her bidding. Each Servbot has its own ability from cooking to cleaning to battle, and they do various chores on board the Bonne family airship the Gesellschaft. They first appear in Mega Man Legends as an enemy of sorts which Tron sends to rob banks and cause a general commotion. However, by Mega Man Legends 2, the Servbots begin to treat Mega Man more kindly (though still antagonistically), thanks in part to their mother's crush on Mega Man.
Servbots are cutesy little robots created by Tron to do her bidding. They behave like children and love and adore Tron like a mother, however strict she may be with them. There are forty-one Servbots in all and assist Tron and the rest of the Bonne family in everything from fighting to chores. Despite their small size, they can be quite powerful fighters and are vital to the Bonnes success as pirates. Servbots also love to eat spaghetti, curry, and drink coffee. 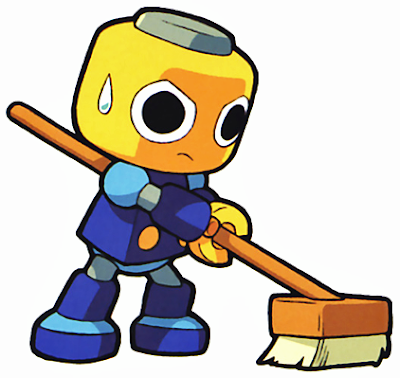 Servbots accompany Tron in Marvel vs. Capcom 2 as well as Marvel vs. Capcom 3 in several of her special moves, including her Hyper Combos King Servbot and Lunch Rush. As an individual selectable character, he is incredibly hard to hit due to his diminutive size, and some attacks will miss him completely. A good example is Venom's Venom Web and most of Abyss' second form's moves, which Servbot is immune to. As such, Servbot is considered the smallest unmodified character to ever appear in a fighting game. A few of his Hyper Combos are also moderately powerful. The Servbot also has the lowest offense and defense of any other character in Marvel vs. Capcom 2 and can be defeated quite easily. Servbots can also be seen exrensively in the background of Tron Bonnes Stage in Marvel vs Capcom 3.
Posted by bluedreamer27 at 7:41 PM