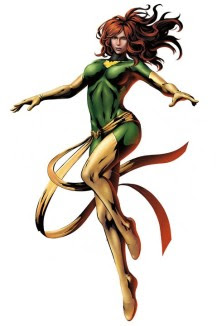 Jean Grey was the younger daughter of Professor John Grey of the History Department of Bard College in Annandale-on-Hudson, New York, and his wife Elaine. When Jean was 10 years old, she was playing with her best friend, Annie Richardson, when Annie was hit by an automobile. The emotion that Jean felt as she held her dying friend awakened her own latent telepathic powers, and she experienced Annie's own emotions as she died. This traumatic event left Jean in a withdrawn and deeply depressed state. Moreover, Jean discovered that she couldn't control her newly awakened telepathic abilites, and had to isolate herself from other people to keep hold of her sanity. 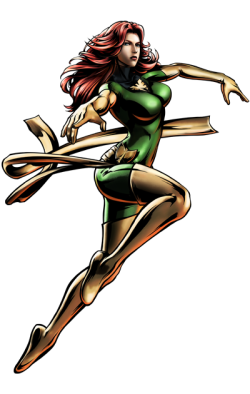 Phoenix is physically deceased in the current comic book continuity. In the Age of X series which was issued in January 2011, a powerful psion who bore a striking resemblace to Jean named Revenant appeared, however it was revealed that this was not Jean, but her daughter, Rachel. It was heavily implied that Jean has been reborn as Hope Summers, the 'Mutant Messiah' from X-Men: Messiah Complex and X-Men: Second Coming, but it was later refused by Nick Lowe who said that "Hope is not Jean Grey. Jean Grey is dead." Anyway, Jean showed herself many times in the comics since her death, as her status remains "unknow", since her essence is alive in the White Hot Room finding all the Phoenix pieces that are lost, so she can return to live.

In one of the opening movie, Phoenix appears at the last second where the villains (Doctor Doom, Super Skrull, Dormammu, Magneto, and Galactus whose shadow appears from the smoke) combine their powers and attack Ryu all at once. Phoenix saves him at the last second, using her telekinesis to block the attacks. She then uses her Healing Field in a large form to restore the strength of all the other heroes, and flies forward with Phoenix Rage, facing the villains on her own.