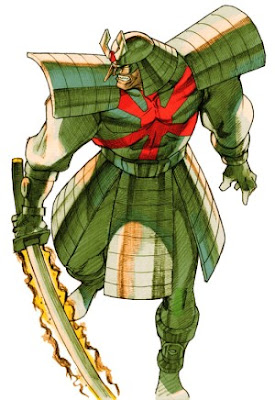 Silver Samurai has an absurd range on many of his attacks, with him being Marvel's main poking character. He can easily fend away many of his opponents' moves with his s.mk, c.lk and many more, albeit even in different situtations(c.hp for an anti air, etc). He also can upgrade his katana with elemental properties to give himself somewhat of an advantage, but at a cost(in MVC2)change his stats drastically(e.g: attack, defense, function on moves, etc.)making him one of the most complex characters in MVC2.

The samurai is only limited to two specials, but his Hyper Combos are damaging. But his Shuriken special(qcf + P)is considered to be one of the game's best projectiles, being able to control its flight trajectory and with it being able to inflict solid amounts of chip damage. His Raimeiken(qcf + PP) can easily lend to massive amounts of damage, and he sports good air combos and a high defense, so there's a good tiny space for minor penalties. 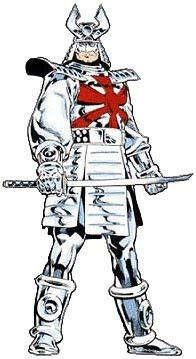 But his massive weakness is his lack of 'awesome' approach, S.S. needs to be close in order to be effective due to being slow, and is a hard-to-master character that's easy to pick up and is rather fairly strong for one. His c.hp launcher is also hard to ultilize, seeing that it launches his opponent at a slight angle rather that straight up. His Raimeiken is also ineffective at far range and is often used for anti air situtations. The Chou Shuriken(qcb + PP) is his only hope of a far-ranged hyper, and it can be a reliable one. Also, Silver Samurai has notable lag on most of his moves(s.mp, s.hpx2, and s.hk) and like Hayato before him, must be forced to cancel into a quick move(e.g: Shuriken) most of the time.

Silver Samurai's Touki(qcb + P for thunder, qcb + lk for ice, qcb + hk for fire) makes much of his gameplay akward and changes the effect on his Shuriken depending on which one is used, they might fly faster with less hits or the other way around. Also, activating the Touki: Fire gives Silver Samurai one of the lowest defenses in the game, so he must be careful about which Touki he activates. Thunder still gives him the Raimeiken, though ice gives him the Hyouga Ken and fire gives out Homura Ken(both have the same command as Raimeiken). The Hyouga Ken is stated to be one of the samurai's best source of combos, since it freezes the opponent and the attack window lasts for a long time, creating mindgame potential.

His assist is average overall, but his beta assist is said to be the best one, he is also one of the only characters to have a hyper that is only in a crossover combination. (ex: Spiral, Zangief, etc.)

Overall, he is one of the characters from old game(s) who has changed alot, making him far more harder to understand and at the same time more easier to pick up ever since X-Men: COTA.