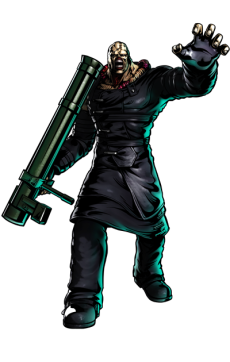 Nemesis was created by the European Branch of the Umbrella Corporation's pharmaceutical company. He was designed to have immense strength and power, yet to also be intelligent enough to follow orders and overcome obstacles, but not intelligent enough to rebel. This particular Nemesis was deployed to Raccoon City to kill any remaining members of the S.T.A.R.S. unit, which had become an annoyance for the corporation. His first victim was Brad Vickers, who he impaled through the the mouth with a tentacle. 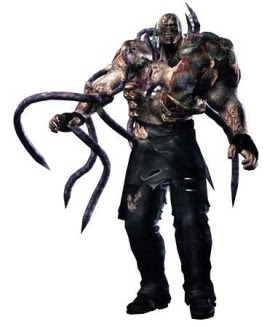 Nemesis appears in Ultimate Marvel vs. Capcom 3 in his first form. His face is stitched together over one eye, with the other eye glowing yellow. Nemesis has no lips, showing exposed gums and teeth. Nemesis wears a large, black jacket that almost conceals the tentacles wrapped around his neck. Nemesis also has black gloves, pants, and boots.
Nemesis has no true personality, only his mission. Nemesis' main goal is to eleminate all S.T.A.R.S. members. Nemesis seems capable of speech, albiet limited speech, only shown saying "S.T.A.R.S." Nemesis is ruthless and will take down anything in its way. However, Nemesis is still controlled by someone else, so his behavior could change with an updated goal.
His rival appears to be Rocket Raccoon . Both are mutated creatures that possesses expertise in firearms. They are also polar opposites in size, with Nemesis being a giant, and Rocket Raccoon being very small. They also have some connection to raccoons, with Rocket Raccoon being an actual raccoon, and Nemesis being the terror behind the Raccoon City Incident.
Posted by bluedreamer27 at 6:27 PM