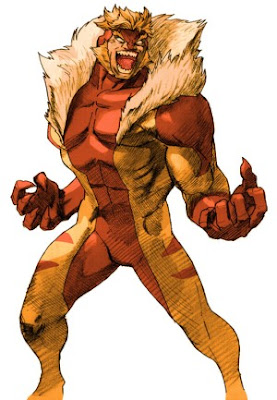 Sabretooth (Victor Creed) is a fictional character, a Marvel Comics supervillain created by writer Chris Claremont and artist/co-writer John Byrne. The character first appeared in Iron Fist #14. Originally portrayed as a non-powered serial killer, Sabretooth is later written as a mutant who possesses bestial superhuman abilities, most notably a rapid healing factor, razor-sharp fangs and claws, and superhuman senses. He is a vicious assassin responsible for numerous deaths both as a paid mercenary and for his personal pleasure. The character Wolverine] is depicted as his long-time enemy, although conflicting accounts have been given as to the origin of their feud. It is also known that he and Sabretooth were victims of the Cold War supersoldier program Weapon X, and that Sabretooth saw Wolverine as competition and tried to make his life miserable. While Wolverine is depicted as suppressing his more savage qualities, Sabretooth does the opposite and embraces them. 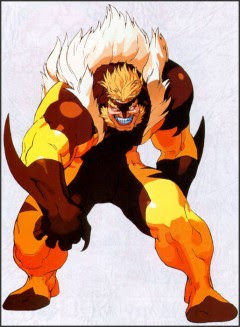 Sabretooth's primary mutant power was an accelerated healing process that enabled him to regenerate damaged or destroyed areas of his anatomy with far greater efficiency than an ordinary human. Originally, the speed of Sabretooth's healing factor's was in proportion to the wound's severity; for example, he could fully recover from an ordinary gunshot wound within minutes or injuries as severe as a broken back and severed spine within days. However, Sabretooth's healing ability was dramatically increased in recent years due to various augmentation procedures. Sabretooth could fully heal from injuries that result in massive tissue damage or loss such as multiple gunshot wounds, slashes, puncture wounds, blunt force trauma, and severe burns within a matter of moments.
Posted by bluedreamer27 at 7:25 PM