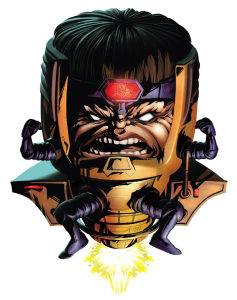 M.O.D.O.K is a villian from Marvel Comics, often appearing as an enemy of Iron Man and the Avengers. His name stands for Mental Organism Designed Only for Killing. Before George Tarleton was M.O.D.O.K., he was a scientist of average intelligence. He was working on an experiment to unlock mental potential for A.I.M. (Advanced Idea Mechanics). Somehow he became the next test subject and became M.O.D.O.C., or the Mental Organism Designed only for Computing. Tarleton would eventually overthrow A.I.M. and go on to be a major problem for the likes of Captain America, S.H.I.E.L.D., Iron Man, and Namor the Sub-Mariner. 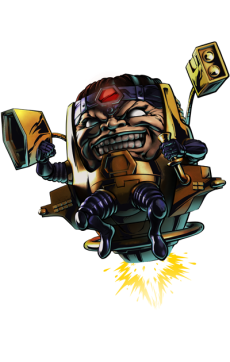 In the Marvel Vs Capcom game, Though very little is known about M.O.D.O.K.'s involvement in the main story, the third trailer implies that he's working with Albert Wesker and Dr. Doom.
Posted by bluedreamer27 at 6:04 PM