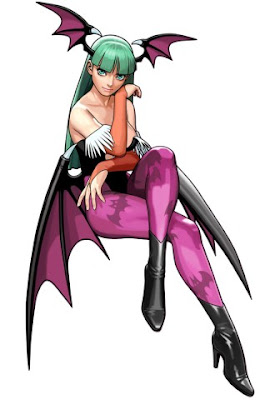 Morrigan Aensland is a succubus video game character from Capcom's fighting game series Darkstalkers (or Vampire Savior in Japan.) She appears in Marvel Vs. Capcom 3 alongside Felicia and Hsien-Ko.
Morrigan is very vain, and lives for little more than the excitement of battle, although her endings in the games as well as various media show that Morrigan slowly takes up more of her responsibility seriously. She appears as a beautiful woman with long, light green hair, a very revealing top, and bat-like wings on her back and the sides of her head. Morrigan can reshape these wings into spikes and blades when attacking her enemies, as well as using them to shield herself from enemy attacks. Her wings can also separate from her, and form into a cloud of bats. She uses a variety of magical attacks as well. 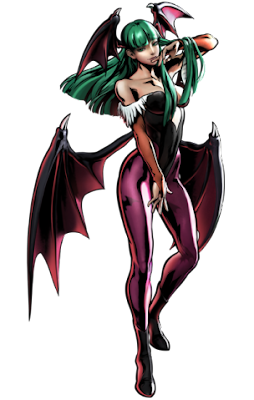 n opening 1 Morrigan is seen fighting Ironman and in the mix she hits Deadpool, gets distracted and gets knocked out of the sky by a Unibeam where she is saved by Chris Redfield.

In Morrigan's MvC3 ending, she finds what seems to be a bar where several demons are. This place is implied to be a "small watering hole" that exists between the human and demon worlds and where the strongest demons come here to celebrate. Several characters can be seen here such as Satannish and Mephisto; Satannish claims the best of the best come here to have a drink and get in a good fight and Mephisto is surprised that Morrigan was able to even come here. Morrigan is interested and decides to raises a toast. They raise a toast to the place where darkness can dance and to their new guest, Morrigan.

Morrigan has moves based primarily on Ryu and Ken from Street Fighter. Morrigan's Darkness Illusion was the first super move to use the button press sequence (LP, LP, F, LK, HP) that is now commonly associated with the Shun Goku Satsu. In Marvel vs. Capcom 3, Morrigan gains a more distict style of fighting. She has plenty of options in the air, unlike Ryu or Ken, and is significantly faster then Ryu or Ken. One of the many running jokes (and points of criticism) among fans is that she has had the exact same sprite set as far as Capcom vs. SNK 2 (2001) as she did in the original Darkstalkers (1994). Her sprites looks especially out of place in the Capcom vs. SNK series as they gain a black outline in the borders. Obviously, in Marvel vs. Capcom 3, Morrigan has a new character model in 3D.