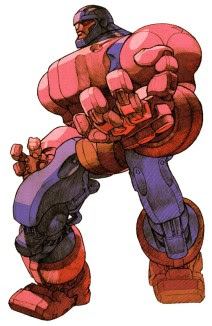 Sentinels are a variety of mutant-hunting robots, appearing in the Marvel Comics universe. A Sentinel appears in X-Men: Children of the Atom, Marvel vs. Capcom 2: New Age of Heroes and Marvel vs. Capcom 3: Fate of Two Worlds. The Sentinels were invented by Dr. Bolivar Trask after he found that his own son had developed mutant powers. After being unable to suppress his son's growing mutant powers, Trask studied the nature of powerful mutations and came to the conclusion that mutants would eventually supplant normal humans as Earth's dominant race if no action was taken to control them. Soon after, Trask and a team of scientists developed the first Sentinel prototypes in a secret laboratory, intending to use them to capture and destroy America's mutants in an ambush. However, Trask realised that not all mutants were hostile to humans, and helped the X-Men to destroy his Sentinel manufacturing facility. Though Sentinels are commonly seen as autonomous robots, some manned models have been developed, with the Sentinel's chest area housing a cockpit for the pilot. In addition, the anti-mutant protocols developed for autonomous Sentinels require them to protect humans from mutants, though their combat programming gives Sentinels a high degree of leeway as to how they do this. Thus, massive collateral damage is often the norm when Sentinels are deployed to capture or kill mutants. 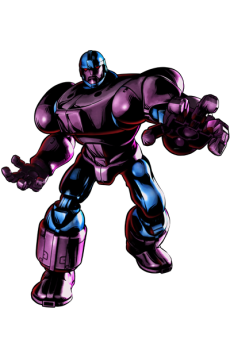 In Sentinel's MvC3 ending, the unit that defeated Galactus begins to disseminate battle data and an unknown energy source, gathered from from Galactus after his defeat, amongst other Sentinels. This improves all Sentinels' combat performance by 250%

A group of Sentinels are then seen alerting the Master Mold about their victories over various groups, mentioning reports listing slain targets under categories like Mavericks, Mutants, Street Fighters, Darkstalkers, and even Divine Beings. They then mention they are preparing to exterminate a portion of the human race, possibly to prevent any mutant or supernatural potential from ever resurfacing in humanity again.