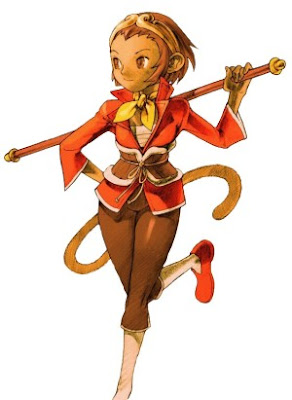 SonSon III is a little monkey girl who is the grand daughter of a character named SonSon, who starred in an old Capcom game with the same name. In the game, she tries to find out why her village was struck by an unknown illness. Sonson and her father are both based on Sun Wukong, the main character of the Chinese novel Journey to the West. Several of her attacks are derived from the series, such as the size-changing bo staff, Wukong's ability to replicate himself using the hairs of his body, or Sonson trying to cook her opponent in the Shinka Hakke Jin and turn them into sake. 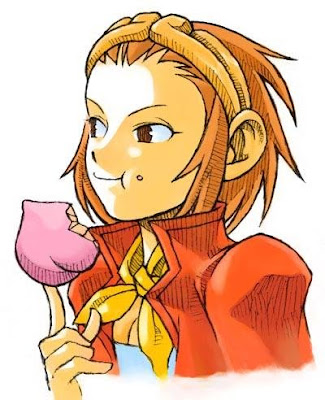 Sonson turns into an Oozaru (Great Ape/Monkey) which you can control with the joystick and buttons. This lasts for 4 seconds with Super Armor. Pressing Kick makes you breathe fire and while you're doing so you can aim it up or down with the joystick. Punch buttons do various punch attacks. Great move that inflicts a lot of damage even if your opponent is blocking. Based off of the Oozaru in Japanese folklore, and the move name refers to another popular moniker of Sun Wukong/Son Goku and is the most popular nickname. Though Sonson is a girl despite the name.
Posted by bluedreamer27 at 8:01 PM