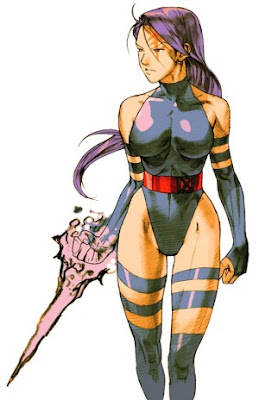 Psylocke was born Elisabeth Glorianna "Betsy" Braddock and raised in England. Born in the small town of Maldon, Essex, Betsy and her brothers had a very privileged life. She is the twin sister of Brian Braddock, better known as the superhero Captain Britain. She eventually came to join the X-Men and learn how to better use her powers after being rescued from Spiral and the Mojo World by The New Mutants. Some time later, in a desperate attempt to save her teammates from being murders by the Reavers, she activated the Siege Perilous portal, given to the X-Men by Roma as a last resort. Beings who entered the portal were cosmically judged and reborn into another life, given a "clean slate".

After emerging from the Siege Perilous, Psylocke was found by the Hand, a ninja clan. Their leader, Matsu'o Tsurayaba, had contacted Spiral in order to save the life of his brain-damaged lover, Kwannon. Spiral informed Matsu'o that Psylocke's telepathy could restore Kwannon, and Matsu'o accepted. With some physical and mental conditioning, Psylocke (inhabiting Kwannon's body) became the Hand's prime assassin, taking the name Lady Mandarin. She gained highly remarkable fighting skills and learned to focus her telepathic power into a "psychic knife" which appeared as a dagger of energy projecting outward from her fist. Lady Mandarin's first mission pitted her against Wolverine. Betsy's psychic knife attack revealed Wolverine's memories of who she used to be and allowed her to break free from the Hand's conditioning. Psylocke rejected her role as Lady Mandarin and escaped with Wolverine and Jubilee. 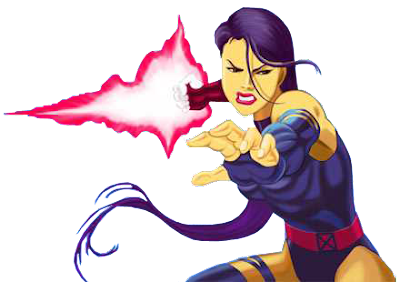 Much later, in an attempt to save Tabitha Smith from Sabretooth (Victor Creed) who had been living at the Mansion while pretending to be mentally handicapped, Psylocke engaged the homicidal mutant in battle. Although a deadly martial artist, she was no physical match for Sabretooth. Finally realizing she had no other choice, she attacked him with her psychic knife. Unfortunately, Creed had been stabbed in the head by Wolverine, losing the part of his brain affected by psionic attacks and her knife had no effect on him. She was already exhausted from their battle and could not manage to fight back, and was consequently mauled by Sabretooth. In a bid to save her life, Archangel and Wolverine went with Doctor Strange into the Crimson Dawn to retrieve a magical liquid that could heal her. The mission was successful, although the healing liquid produced side effects: a red dagger-shaped tattoo appeared over Psylocke's left eye, she gained the ability to hide in and teleport through shadows, and her personality took on a cold edge.
Posted by bluedreamer27 at 6:56 PM