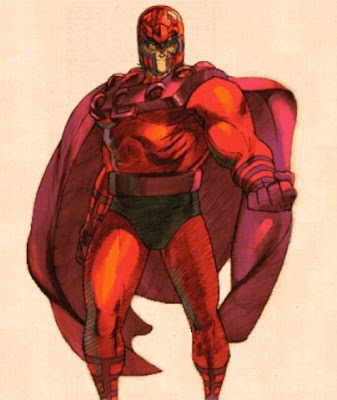 Magneto (born Max Eisenhardt) was a German Jew in Auschwitz Concentration Camp, his experiences there were the basis of his action in the decades to follow. He was a friend of Charles Xavier (around that time he discovered his mutant magnetism power) who would later become the founder of the X-Men, but parted ways due to their ideologies being too different. Some time later he formed the Brotherhood of Mutants as a mutant supremacy group which came into conflict with the X-Men a number of times, but has sometimes fought alongside them against a greater threat. 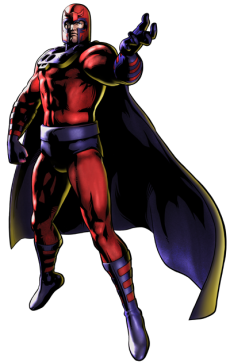 In Marvel Vs Capcom, Though the story loosely bases on the Onslaught era (the entity created by Charles Xavier and Magneto combined), Magneto labeled as an assist in the game may or may not be considered as canon. It is unknown if this form of Onslaught contains the consciousness of Magneto like the comics or a different entity as a whole.
(MVC3) Though Magneto's involvement in the story is mostly unknown at this time, the third trailer shows him stealing a virus sample from Albert Wesker, possibly planning to use it to turn humanity into mutant beasts or killing the human populace, similar to his plans in the X-Men comics and movies, or perhaps to keep them from infecting the mutant populace in the process, however in the Extended Intro he's shown to be on Doctor Doom's side althought he may be "pretending" to be on his side and plotting his own plans. After defeating Galactus, Galactus offered a "gift" to recreate the utopia world, Taa II, Galactus's Homeworld before devour. This new Taa II is where all Mutants living on Earth can now freely leave Earth and prosper peacefully without any more discrimination.
Posted by bluedreamer27 at 5:55 PM