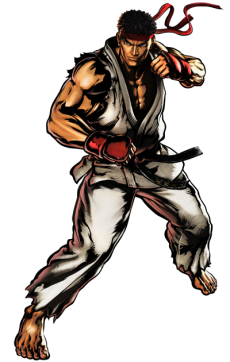 Ryu is a video game character created by Capcom, and is the main character in the Street Fighter series. Ryu is the archetypal fighting game protagonist, and he has provided the basis for many other fighting game characters. Ryu was an orphaned child, with no knowledge of who his parents were or if they are still alive. When he was a young child, he was adopted by a man named Gouken and began living with him as well as learning a martial art rooted as an assassination art. When Ryu was about 23 years old, Gouken thought that he was ready to travel the world in order to test his skills against the best fighters in the world. With this, Ryu left Gouken and Ken, and headed to fight in the first World Warrior tournament.

Ryu is the quintessential "basic" character in fighting games with an intuitive array of punches and kicks, and very basic special moves. Unfortunately, he is a rather predictable character because of being very popular, and many pro-players know much of his tactics, that doesn't mean that he's considered ineffective because of this. Ryu is an extremely balanced character who can still put up a good fight and has one of the best assists in the Vs. series(Hadouken), especially in TvC, where his Hadouken is godly in extending combos.
It's assumed that Ryu's rival is currently Wolverine. Both are fierce veterans in the game series, often being many fans' #1 character picks, and both are portrayed as warriors with an honor code, a dark side, and the will and determination to fight against all odds. Both have also spent time living and training in Japan, for many years at a time. Furthermore, they are both iconic characters for their respective franchises, both specific (X-Men and Street Fighter) and general (Marvel and Capcom), so the pair seems ultimately justifiable.
Posted by bluedreamer27 at 7:19 PM