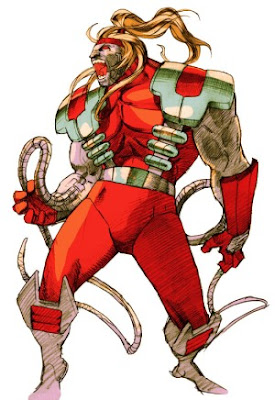 Arkady Rossovich was a Russian youth who was subjected to government testing during the early days of the Cold War. Soviet scientists were attempting to create a deadly supersoldier, perhaps in response to Germany's Red Skull and America's Captain America. Arkady was given super strength and stamina, and outfitted with two carbonadium coils that retracted into his arms. Unfortunately, the tests also required him to drain the life force of others to remain active. Code named Omega Red, he was assigned to destroy Wolverine, then an American government agent, but was defeated. Having gone for too long without repowering, Omega Red fell into a coma and was believed dead. Decades later, Omega Red was revived by members of the Hand, the same ninja group that transferred Psylocke's mind to a new body. The sacrifice of their life forces sufficiently powered Omega Red, and he began a new mission to destroy Wolverine and any who would stand in his way..

Arkady Rossovich, aka Omega Red, is a Russian-born mutant with super-human strength, agility, speed, endurance, durability, and reflexes. He is also able to secret a pheremone from his body known as "Death Spores"-poisonous chemicals that kill or sicken anyone in his immediate vicinity. On humans this works instantly, but meta or superhuman beings can withstand the effects for an extended period of time.
Aside from his mutant abilities, Arkady is an excellent hand-to-hand combatant,having recieved training in both Russian and Japanese criminal underworlds. He is also a highly intellegent criminal mastermind.
Posted by bluedreamer27 at 6:40 PM