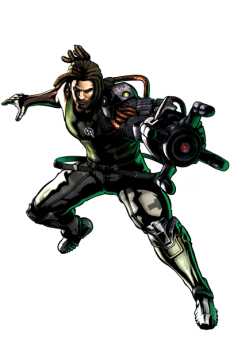 Nathan Rad Spencer, a.k.a. Spencer, is a character from the Bionic Commando Series. In Marvel Vs. Capcom 3, he carries on his attire from Bionic Commando (2009.) Spencer was originally a member of the Federal States of America's armed forces, but his military career was cut short when he lost his left arm to a grenade. While on rehabilitation leave, he accepted a position as the first test subject for bionics technology by T.A.S.C., the FSA military's intelligence division. He was given the codename: Research And Development #1, or RAD #1, and the name stuck; many continued to call him "Rad" Spencer for years. Under the supervision of TASC agent and supervisor of bionics technology Joseph Gibson, Nathan was the first human subject to be fitted with and control a bionic limb. Though the technology was still in the prototype phase, the fascistic Imperial Army attacked, and TASC's first operative, Super Joe, was captured. Nathan was activated early and sent into the field, given the field rank of Captain, and sent to rescue Joe and stop the Imperials. He succeeded with flying colors and his statue, along with Super Joe's, now decorates the Avenue of Heroes in Ascension City, along with other heroes of the conflict. Super Joe was promoted to Director of TASC, and he and Spencer oversaw the training of the TASC Special Ops...new "bionic commandos", just like Spencer. This unit would come to be legendary as the deadliest fighting unit in the world. However, bionics technology proved divisive, and the populace grew weary of being normal humans in a world of super-powered bionics. Demonstrations and riots followed, coming to a head when a group of rogue bionics was accused of aiding a rebellion against the FSA. The investigation found Nathan Spencer the sole perpetrator of all crimes, and he was convicted and sentenced to death by a military tribunal. 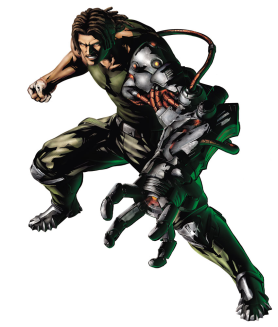 He was actually innocent of all charges, but despite proclaiming this, his appeal was denied. He was stripped of his bionic arm and placed in the TASC Military Disciplinary Facility in Fort Leavenworth to await execution. The anti-bionics sentiment came to a head, and a new executive order known as the Bionic Purge was passed almost overnight, outlawing bionics technology. Merely being a bionic became against the law, and bionics were forced to hand in their implants or face prosecution. As a convicted criminal on death row, Nathan could do nothing to oppose the move and became despondant. On the day he is scheduled to be executed, however, an experimental WMD known as the Witherer is detonated in Ascension City, annihilating it and its citizens, and Nathan is given a chance at a pardon in exchange for tracking down and apprehending the perpetrators, known only as BioReign.
Spencer appears to be on the good side when he is seen, along with other heroes, taking down the jets.
Posted by bluedreamer27 at 6:23 PM