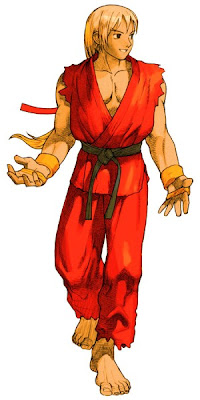 Ken Masters is a video game character created by Capcom. He is one of the main characters from the Street Fighter series of fighting games alongside Ryu, having made an appearances in all major incarnations of the series. Ken is most easily recognized by his sparring gloves (yellow in the Alpha Series, red or brown elsewhere) and bright red karate gi with the arms ripped off, similar to Ryu's (Capcom has said that a red gi was chosen to stand out and to reflect his more flashy style of fighting). Unlike Ryu however, Ken's gi shows less wear and tear, this difference was first shown in Street Fighter III and will continue in Street Fighter IV. His hair is blonde (some sources indicate that his hair may in fact be dyed; evidenced that some of his sprites have black eyebrows) and has long eyebrows. He wears a black belt at his waist and fights barefoot. In the Street Fighter Alpha series, he had longer hair that he tied back with a red ribbon into a ponytail. The official explanation for the loss of the ribbon is that he gave it to Ryu to wear during the events of Street Fighter Alpha 2 (as stated in Ken's own ending); Ryu was distracted during his fight with Ken because he had just fought Akuma, and ended up losing. Ken gave Ryu the headband to remind him of their fight. 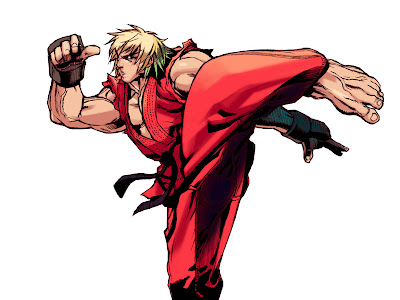 Ken mainly focuses on the Shoryuken move, to the point where his Shoryukens set the opponent on fire. Ken's Tatsumaki Senpuukyaku does not allow him to dodge projectiles at the start of the spin, but spins faster, allows him to hit his opponent up to five times. Ken's Hadouken attacks are less concentrated than Ryu's, but Ken's Shoryuken has more range and does more damage than Ryu's.
Posted by bluedreamer27 at 9:51 PM