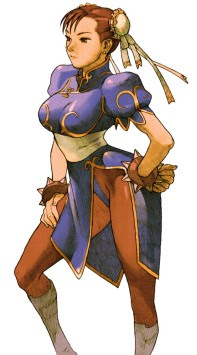 Chun-Li is a video game character created by Capcom. She is part of the Street Fighter series. In the Street Fighter series Chun-Li was an Interpol investigator who had been searching for clues to the recent death of her father. Getting into a friendly spar with an old teacher of hers and friend of her father, Gen, he gives her a lead into who may have killed her father—the mysterious crime syndicate Shadaloo. Finding its leader, M. Bison, she demands he tell her what happened to her father. To her surprise, Bison attacks and basically makes quick work of her, then flies away, laughing at her and telling her if she attacks him again he will kill her just like he did her father. With tears in her eyes, Chun-Li swore vengeance. 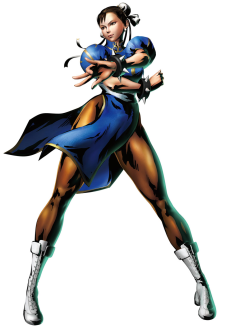 In Marvel vs Capcom, Chun-Li is the original fast character in the Street Fighter series, utilizing multiple rapid attacks rather than the slow damaging strikes of larger characters like Zangief. Her agile and swift movements are a favorite amongst game-players. It is interesting to note that in the early days of arcade fighting games, many other female characters played in a similarly speedy style, following the example set by Chun-Li. In previous games (Street Fighter 2 mainly) she was basically a charge character along with Guile and E.Honda but her style was changed in later games to give her a more technical feel as well as her trademark "speed" granted to the player.

Chun-Li was one of the few characters to be able to air dash pre. Tatsunoko vs. Capcom. She can now perform an angled air dash in MVC3.

Morrigan seems to have a certain resentment and jealousy towards Chun-Li. In the Capcom game Pocket Fighter, Morrigan wanted to overcome Chun-li's status as the strongest and most beautiful female fighter.