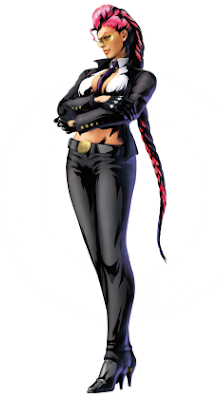 Crimson Viper, or C. Viper for short, is a secret agent from the Street Fighter franchise and appears in Marvel vs Capcom 3: Fate of Two Worlds, thus being a recently created character by Capcom this is the first crossover game in which she appears.
(In Marvel Vs Capcom Story) In Crimson Viper's MvC3 ending, she finds an unknown person inside of her office and demands him to leave. The person says C.Viper is a hard person to track down and he simply waited for her here. He reveals himself to be Ultimate Nick Fury and offers C.Viper a job. C.Viper is interested in the money, but questions Fury on why he chose her specifically. Fury says his organization only employs the best and that what he thinks C.Viper is. He then asks C.Viper if she has ever heard of a little agency called S.H.I.E.L.D. 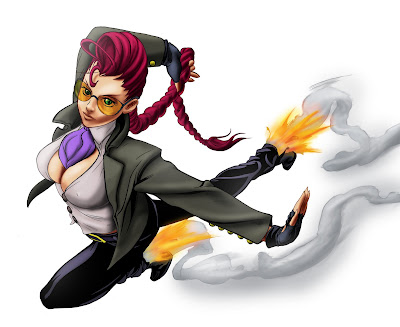 Viper is one of the few rushdown type characters from the Street Fighter series, employing the use of mixups, feints, and baiting. As the only character in MVC3 that has EX moves, Viper is also rather heavily-meter based. She can also perform eight-way angled air dashes for good mobilty.
Posted by bluedreamer27 at 7:51 PM