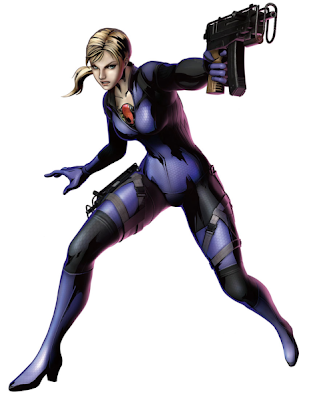 Jill Valentine is a video game character in the Resident Evil survival horror series. She is one of the protagonists in the original Resident Evil and the first Resident Evil character to appear in the Marvel Vs Capcom series. Preceding Chris Redfield and Albert Wesker, both appear alongside Jill (in the first DLC pack) in Marvel Vs. Capcom 3. A skilled expert at close quarters combat and firearms use, and a piano player who memorized every Beethoven sonata, Jill Valentine was a member of the Alpha Team of S.T.A.R.S., a special unit of the Raccoon City Police Department that was set out to deal with terrorism and increasing cases of violent and serious crimes.

Jill's ending shows her confronting Blade and asking if she can trust him then calling it a truce as they both fight off the Legion of Monsters, consisting of Man-Thing, Living Mummy, Werewolf By Night, and Morbius.

In a radical change from her MVC2 play style, Jill is now a nimble rushdown character with little keep-away capability. Exploiting the full potential of her new moveset primarily requires players to master her Feral Crouch technique. This technique put her in an enhanced state that keeps her in a low stance and incorporates high-speed dashes and ruthless combo-based offense, but is considered difficult to control and leaves her defenseless. Her Level 3 Hyper Combo, Mad Beast, places her in a much longer period of Feral Crouch, heightening the risks and benefits of Feral Crouch to a much greater degree.

In addition, she can use various command grabs to break a stubborn opponent's defense, such as the heavy attack button that enables Jill to perform a cartwheel flip over an opponent that inflicts no damage, but immediately places her behind the stunned opponent, where her combo potential can be put to good use.