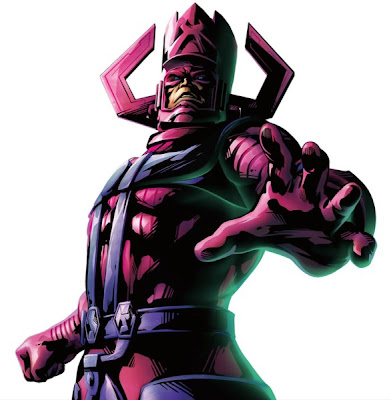 Galactus, the Devourer of Worlds, known to be a major villain of the Marvel comic Fantastic Four, is the final boss in Marvel vs. Capcom 3: Fate of Two Worlds, due to him being lured in by the alliance between Doctor Doom and Albert Wesker.

Galactus is the sole survivor of the universe that existed prior to the current universe. Originally Galactus was a humanoid named Galan, who was born on the planet Taa, a paradise-like world whose civilization is said to have been the most advanced of any of the known universe of that time. At the moment Galan's universe met its end, the Phoenix Force amassed the positive emotions of all living beings in the cosmos to preserve them from eternal damnation, enabling the Sentience of the Universe — the previous universe's equivalent to Eternity — to meet with Galan. Within the "Cosmic Egg" the Sentience of the Universe revealed itself to Galan and informed him that though they both would die in the final moments of the universe, they would both survive through a joint heir born into the next universe. The Sentience of the Universe merged itself with the mortal Galan and thus Galactus, the devourer of worlds, was conceived.

In the Marvel Universe, Dr. Doom teamed up with Dormammu and reunited a large number of known villains. Soon, they made contact with the Capcom Universe, and joined forces with Albert Wesker in order to unite both "Earths" into one. Galactus took notice and, in his mind, sees no other alternative but to destroy the world to prevent the catastrophe. The heroes and villains now must team up to defeat this new larger threat, or else lose everything.