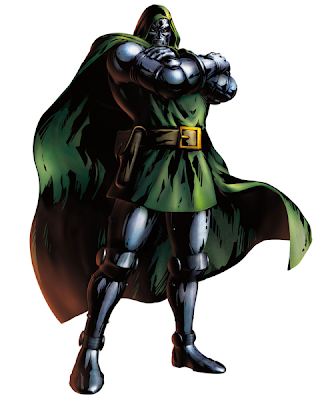 Doctor Doom, also known as Victor Von Doom, is a Marvel Comics villain and an enemy of the Fantastic Four, Doctor Strange, Silver Surfer, Spider-Man, and the Avengers.

Doom is an extremely vain individual, and spites Mr. Fantastic for being a rival to his genius. Some accounts say the explosion of his machine only caused one scar, which he could not handle, as "Doom should be perfect." He also places his own importance over others, and has no problem killing people when the situation calls for it, regarding life much like a game of chess. But Doctor Doom is a gentleman and is bound by his honor and pride. He seems to value science heavily, preferring to build machines that have the same function as some of his magic spells. The only people he's seemed to ever care for are his parents, vowing to avenge them once they were gone, and going to great lengths to reach whatever dimension his mother is trapped in.

Although a major threat to the Marvel universe, Doom can also prove a valuable ally. He has been seen to team up with numerous superheroes on numerous occasions, even his arch-rivals, the Fantastic Four. In most cases however, the alliance works in Doom's favor, and he will often abandon the person as soon as he gets what he wants. Such as when he helped defeat the god-like Beyonder, only for his plan to involve stealing the Beyonder's power. 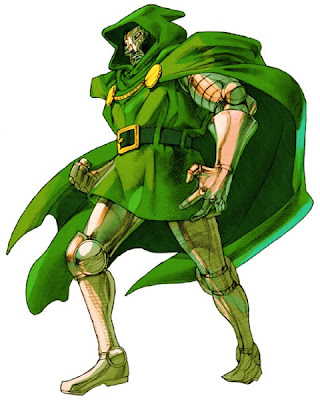 In the storyline of Fate of Two Worlds, Doctor Doom plots with Albert Wesker to create a portal between their two worlds in order to conquer each. At the suggestion of the Super Skrull, Doom decides to siphon the power cosmic from Galactus and his worldship in order to create the link between his world and Wesker's. Galactus eventually begins to notice the theft and attempts to consume both worlds in retaliation
Posted by bluedreamer27 at 8:36 PM