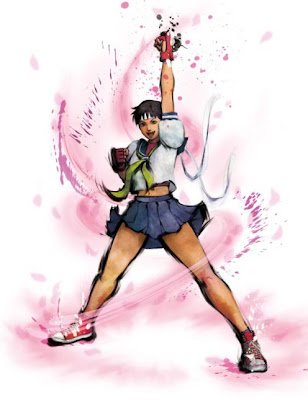 Having not trained officially in the Anasatsuken form of Shotokan like Ryu & Ken, Sakura dives head first into any new ability she discovers. As such, without proper training, she was unable to resist the lure of the Satsui no Hado.
Her game play is like Sakura in Street Fighter Alpha 2, her Hadouken now travels across the screen horizontally instead of disapating diagonally. Her Shouoken no longer has the energy shield in front of it when used on the ground, but it is present when she performs the attack in mid-air. Her Shinnku Hadouken is now an energy beam like Ryu's instead of a steady stream of repeated diagonal Hadoukens. She also gains the Ashura Warp and Shun Goku Satsu from Akuma.
Posted by bluedreamer27 at 8:10 PM