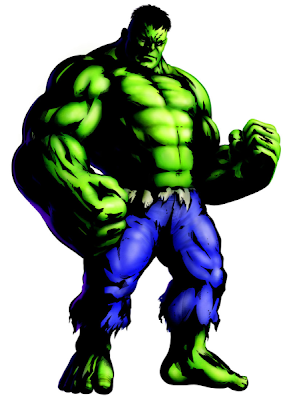 The Incredible Hulk, a.k.a. Robert Bruce Banner, is a famous Marvel Comics superhero. He's appeared in most of the crossover fighting games, making his fighting game debut in Marvel Super Heroes. While in human form, Bruce Banner is a scrawny, weak looking individual. He has brown hair and wears large glasses. When angered, he transforms into the Hulk. The Hulk is a large, green creature with absurdly large muscles. Despite usually being green, there have been times where he was another color, like gray. The Hulk is often seen wearing purple pants. 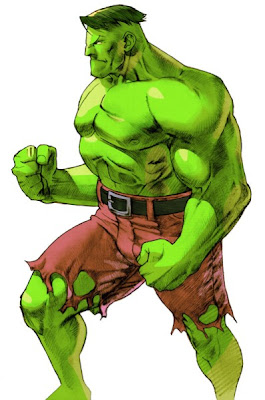 In Marvel Vs Capcom, Hulk was first seen fighting with Chris Redfield in the first trailer. In the third trailer, he was seen catching X-23 after being blown away by Magneto's magnetic push. He also saved Chris from an incoming M.O.D.O.K. (who was also being blown away by the magnetic push) in the process.﻿
Bruce Banner is an overall caring individual, especially to those he is familiar with, like Betty Ross or Rick Jones. However, he can be paranoid about people representing a military or government group, due to them constantly hunting him. He is very brilliant, and creates detailed plans for different situations, like his plan to have his half-alien son Skaar (who wants to kill the Hulk) battle against enemies such as the Juggernaut and Wolverine's son Daken, which was really training to kill the Hulk if he ever got out of control. He has had suppressed emotions for most of his life. He is constantly plagued by the Hulk, always searching for a way to control or be rid of him
Posted by bluedreamer27 at 9:22 PM