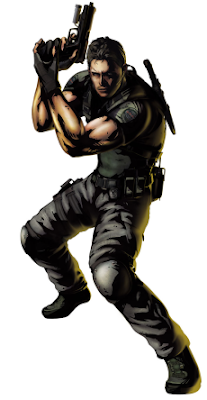 Chris is the older brother of Terrasave member Claire Redfield. At the age of 17, Chris joined the United States Air Force as a pilot and marksman, and excelled in firearms handling and hand-to-hand combat. Although he was a talented airman, he was constantly in direct conflict with his superiors, unable to properly follow orders without speaking out. Unfortunately, he was unable to settle the many disputes he found himself in, and was eventually discharged without honors. 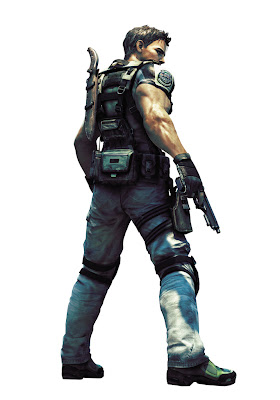 (In game Story) In Episode 1 Chris is seen fighting Hulk and later seen saving Morrigan from falling to her death. Chris seems to be one of the main protaganists of the story, as he is seen encountering Wesker and M.O.D.O.K. in Episode 3 at gunpoint. He and Hulk no longer see each other as adversaries after they realize that they're fighting the wrong people (e.g. when Hulk caught X-23 and punched M.O.D.O.K. away). Both he and Hulk are last seen confronting Wesker and Magneto in Episode 3 before the cataclysmic events of Episode 4, aiding the other heroes in fighting the villains.

In Chris' ending, Wesker is finally apprehended and convicted for the destruction of Raccoon City. In a formal court procession, the prosecutor charging Wesker is Matt Murdock, also known as Daredevil. Before Wesker can interrupt the prosecutor and make a snide retort, the bailiff guarding him is shoved aside by an angry Chris, who then slams Wesker's head on a court desk. Chris tells Wesker that as long as he's around, Wesker will never escape the law and will be rotting in a jail cell for a long time. Chris then apologizes to the judge for his sudden outburst and allows Mr. Murdock to finish his reciting of evidence.

With his heavy arsenal of firearms and explosives, Chris plays well as a keep-away character. His dependable sub-machine gun can keep characters at a distance, while the shotgun stuns the opponent in addition to inflicting damage, leaving them vulnerable to combos. In particular, it is easy to perform the Grenade Launcher Hyper Combo off of his sub-machine gun attack. Chris' mines can serve as traps to catch brash rushdown characters off guard, as can his incendiary grenades.

One main weakness of Chris is his lack of anti-air attacks. He has a hard time defending against opponents who focus on overhead aerial assault, so characters with anti-air assists are highly recommended.