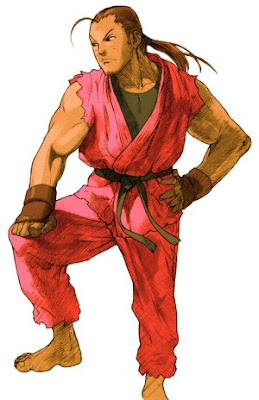 Dan Hibiki is a character from Capcom's Street Fighter series of fighting games. Dan is consistently portrayed as an arrogant, overconfident, yet a generally weak character in many of the games he is featured in (for that reason, considered a joke character). He is widely considered to be the comic relief of the series because of his over-the-top poses and battle cries.

Dan has a similar outfit to Ryu and Ken, wearing a traditional Karate gi, but pink (a color combination of Ryu and Ken's gi). Dan also wears a black undershirt. His head and face closely resembles Robert from Art of Fighting.

Though his fighting stance is similar to Ken and Ryu's, it is more "loose" and animated. Many of his mannerisms directly mirror those of Yuri Sakazaki. 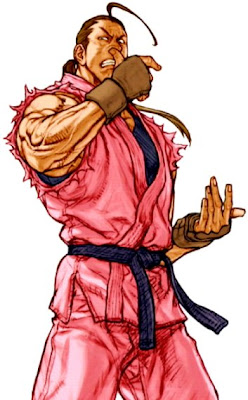 Due to his generally weak and slow moves, Dan is widely regarded as a joke character, not to be used for any serious competition. He is also popular as a handicap to skilled players, as his weakness makes winning matches more difficult when against notably powerful characters such as Ryu, Ken and Charlie. As such, selecting Dan can in itself be seen as a taunt, since doing so implies high confidence that a player is superior in skill to his or her opponent. Strangely enough, all these weaknesses and the sheer comedy value have combined to make Dan a campy fan favorite of sorts.

In some games, however, Dan's strength and ability is increased to give him a fighting chance on the level of most opponents, in such cases, his comedy value is in his over the top attitude. Despite still being a joke character in Street Fighter IV, Dan's skills are enough to match of higher tier characters (his Gadouken has increased range and his Koryuken is stronger, compared to the previous games).