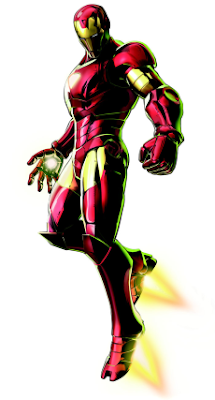 Iron Man, aka Anthony "Tony" Stark, is a Marvel superhero who fights using advanced armor of his own design. He appears in several Marvel vs. Capcom games.
ron Man's first appearance was battling Morrigan while both were airborne. Later, with the appearance of Galactus and dangerous villains determined to conquer both the Marvel and Capcom worlds, Iron Man ceased battling Morrigan and turned his attention to stopping the villains. He is later seen saving Viewtiful Joe from plummeting to his death after Joe and Amaterasu unsuccessfully attacked Super Skrull, flying alongside Morrigan (who saved Amaterasu) towards the New York mainland. Iron Man then helps to rally together more Marvel and Capcom heroes, who take the fight to the enemy.

Iron Man's MvC3 ending involves him noting in his journal that uploaded battle data, gathered from his climactic battle with Galactus, shows that he was barely able to defeat him. To better prepare himself for any future threats, Iron Man uses the battle data to build the new Galactus-buster armor. 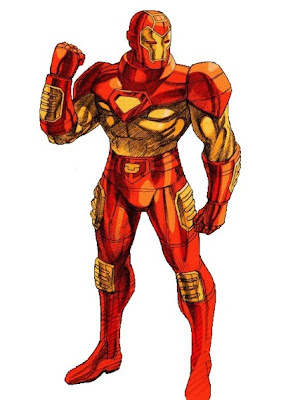 Iron Man is a noble hero that will do anything if he believes it will help people, which is why he went along with the Superhuman Registration Act. However, he has also been portrayed as a somewhat selfish womanizer. In the past, he has struggled with alcohol; a struggle that almost ruined his life. He has successfully not drank a sip of alcohol since his victory over his problem.

Tony is a friendly man, and is very generous. Because of his high economic status, he often offers job positions to his fellow heroes. Much like his friend, Steve Rogers, Iron Man can be very stubborn when supporting something, such as in the case of the superhero Civil War.

Iron Man is a jack-of-all-trades character suitable for beginners, able to operate with both keep-away and rushdown strategies with reasonable effectiveness. He is reasonably fast and agile, and possesses a modest amount of health.