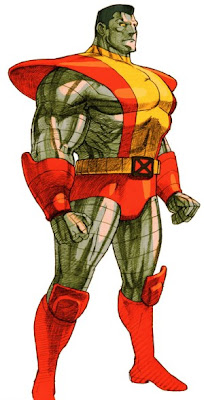 Piotr "Peter" Rasputin was born on a Soviet collective farm called the Ust-Ordynski Collective near Lake Baikal in Siberia. He lived there with his mother Alexandra, father Nikolai, and sister, Illyana. His older brother, Mikhail, had been a Russian cosmonaut and had apparently died in a rocket accident Peter's superhuman powers manifested during his adolescence while saving his sister from a runaway tractor. At first, Peter was content simply to use these powers to aid the other people of the collective; however he was soon contacted by Professor Charles Xavier, the founder of the X-Men. Xavier was recruiting a new team of X-Men to rescue the original team, most of whom had been captured by the sentient mutant island Krakoa. 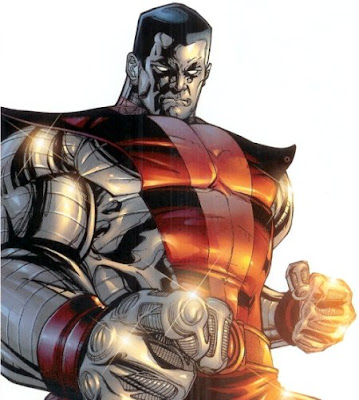 In armored form, Colossus's has superhuman strength which enables him to lift atleast 100 tons under normal conditions. He has superhuman stamina which means that he will tire much more slowly than regular human beings and can continue exerting himself for hours without tiring. While in this state he also does not require food, water or air to sustain himself and can withstand high impact assaults as well as extreme temperatures from 70º above absolute zero (-390º F) to approximately 9000º F. Despite this near-invulnerability, however, it is still possible to injure him, and if knocked unconscious, Colossus reverts to his human form. In his metal form, Colossus bleeds pure energy when injured, and he has no organs that can be damaged. A particular flaw in his powers is that he must turn his entire body into metal ( for example he can not just change his arm into metallic form). In Colossus's metal shape, he is resistant to telepathy and other kinds of psionic attacks. Colossus is also an excellent hand-to-hand combatant, having received training from Wolverine and Cyclops . He also has had training in acrobatics and sword fighting from Nightcrawler. In his human form, he is exceptionally strong and fit, though not superhumanly so. He can lift about 700 pounds. He has also completed college-level courses at Xavier's school.

It is also worth noting that Colossus only uses these powers in violent situations with the greatest of reluctance. Instead, he feels it is his responsibility to use them for the betterment of others rather than for combat.