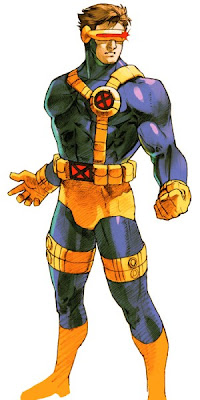 Scott Summers is the oldest of the mutant sons of Major Christopher Summers, a test pilot in the U.S. Air Force, and his wife Katherine Ann. When his father flew the family back from a vacation in his vintage private plane, a de Havilland Mosquito, the plane was attacked and set ablaze by a scout ship from the alien Shi'ar Empire. Katherine pushed Scott and Alex out the plane door with the only available parachute. The parachute was unable to slow their fall sufficiently to prevent Scott from suffering a head injury on landing (the injury damaged the part of Scott's brain that would have enabled him to control his optic blasts). This was also the first time Scott used his mutant power to slow their descent.

Cyclops possess the ability to emit scarlet beams of energy from his eyes. He constantly abosrbs ambient energy, such as sunlight, and converts it into his optic blasts. Due to a head injury recieved as a child he cannot shut off his power and thus must constantly wear his ruby-quartz visor or sun-glasses of the same material.
He is Ryu's original rival since the first debut of X-Men vs. Street Fighter.
With the exception of Marvel vs. Capcom 3, Cyclops had made appearances in all Marvel crossover games. The only non-playable role he has had in the series was as an assist character in Marvel vs. Capcom: Clash of Super Heroes.
Posted by bluedreamer27 at 7:58 PM