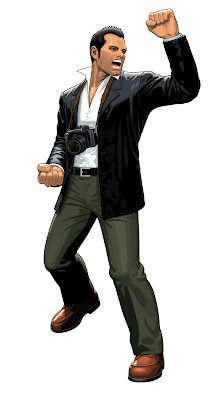 Frank West is a character that originates from and is the protagonist of the Capcom video game "Dead Rising." He has also made an appearance in the Xbox LIVE Arcade Game "Dead Rising 2: Case West." Originally featured on Tatsunoko vs. Capcom, he was originally intended to appear as a playable player in Marvel vs. Capcom 3. As his silhouette can be seen in much of the artwork for the game and even being seen on the special edition comic cover. It was rumored that he would have a Chuck Greene color scheme, the main protagonist of "Dead Rising 2."

Frank West was deconfirmed by creator Ryota Niitsuma, stating that he was, for a long stretch of the development cycle, on the roster and was deep in development but cut due to unforeseen "extra work". He will most likely become available as DLC due to his popularity, and him being already partially developed. 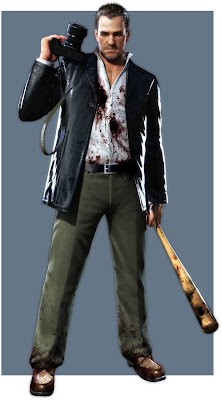 At first many people believed that Frank West would be revealed with, and rivaled against, Spider-Man, since both are photographers who maintain a sense of humor in serious situations and have cannibilistic foes (Spider Man with Venom and Frank with the Undead specifically). However this was not the case.
It is highly likely that the unnamed pilot of the Helicopter occupied by Chun-Li in the Episode 2 cinematic trailer is Frank West. Since the pilots face is always obscured by his helmet and his attire appears to be Franks default Dead Rising outfit, this may be his appearence in a CG, as Niitsuma stated he was included in one, being cleverly edited out.
Posted by bluedreamer27 at 8:51 PM